The Missing Maps project, which launched in 2014, aims to literally and figuratively put more than 20-million at-risk people on the map using OpenStreetMap (OSM) as a platform. We need to fill in “missing maps” before the next disaster strikes, ensuring the maps have detail sufficient for emergency responders to hit the ground running.

OpenStreetMap is an open and free source of geographic data. Anyone with a username can add, edit, or update data, so the Missing Maps project is community driven and focuses on local knowledge. Remote volunteers around the world use satellite imagery to trace features, such as roads and buildings. Community members and volunteers in the area then use the base map to add local data to these shapes, including street names, addresses, building types, and points of interest.

As we look back at 2015, here are a few success stories from the Missing Maps project.

One area Missing Maps started working in is Dzivarasekwa, a high-density urban township in Harare’s North District in Zimbabwe. Community mapping in Dzivarasekwa was performed as part of an urban disaster risk-reduction project, with the goal of strengthening community safety and resilience to reduce the number of deaths, injuries, and socioeconomic impacts caused by urban disasters.

Community discussions and the baseline survey resulted in guided decisions about which details to collect during the community mapping activity. Volunteers in Dzivarasekwa surveyed more than 8,000 buildings across 7 square kilometers. One output of the mapping is shown below. The results showed a correlation between housing quality and building material type, with concrete homes observed to be in worse condition than brick homes. When combined, this data provided the locations of residents most vulnerable to disasters, such as flooding, making it easier to plan future disaster risk-reduction activities. The Zimbabwe Red Cross can now plan to serve areas that are deemed high priority based on survey and map results and target specific homes that require help immediately. Now with detailed information including house addresses, the process is much more efficient. 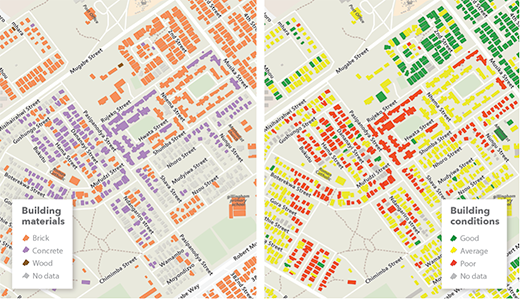 Community mapping was conducted to complement a baseline survey and urban risk profile, and has helped to inform the activities that will be implemented in the next stages of the resilience project.

Ushirombo is a predominantly rural area in northwest Tanzania, with about 84% of the residents relying on agriculture as the primary livelihood source. The rest depend on activities such as small-scale gold mining, lumbering, and informal micro-enterprises.

Community discussions and a baseline survey revealed waterborne and water-related disease is one of the primary issues in this region because most of the residents are dependent on collecting water from traditional wells and natural springs that are neither clean nor safe. Therefore, recording water and sanitation points was a priority during community mapping.

Missing Maps trained volunteers and community leaders on how to use Field Papers and OpenMapKit to collect data. Mappers were able to collect data in Ushirombo quickly because buildings are within close proximity to each other on flat terrain; however, many challenges still hindered the collection process, such as the lack of road names and formal building addresses. Old satellite imagery also contributed to the problem because the base maps on Field Papers and the OpenMapKit app did not match the reality on the ground. 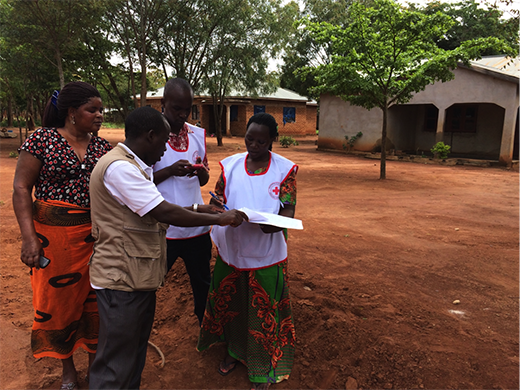 Volunteers using Field Papers and OpenMapKit to collect local data that will be added to OpenStreetMap. Copyright American Red Cross.

Despite these challenges, the participation of community leaders in the community-mapping process led to the success of mapping Ushirombo. Leaders such as village chiefs joined the field mapping expeditions to help navigate and manage community relationships. This aided data quality and collection efficiency because mappers were able to continue collecting data while community leaders spent time answering questions from residents.

Map data is now used by the Tanzania Red Cross and American Red Cross to make programmatic decisions for an urban risk reduction program in the area.

Imagine not being able to use your phone to look up directions, nearby hospitals, restaurants, or just about any answer to a question at the tips of your fingers. For many people this is reality, because most of the world is not on the map. Thousands of towns and cities are invisible on the world map. This makes it difficult for disaster responders to come to residents’ aid when an earthquake, landslide, or typhoon strikes.

Communities in Cyahinda, Rwanda, an agricultural region in the Nyaruguru district near the Burundi border, face challenges such as poor health and sanitation, environmental degradation, and disaster risks related to landslides and drought. 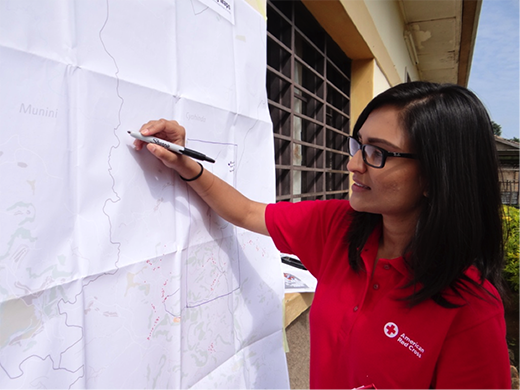 Low-density villages and collections of buildings are spread across hills terraced for small-scale farming, connected by dirt roads and tracks. The Rwanda Red Cross and American Red Cross spent two weeks in April mapping the area. Field mapping in Cyahinda’s rural setting was also slower than other mapping projects due to the size of the area, wide distribution of buildings, and tiring walks through the hilly terrain.

The validated base data was uploaded to OpenStreetMap, while the project-specific data is being used to create maps to assist with planning and decision-making. For example, residents may decide to look at the distribution of mudslides to decide where to safely build their homes, schools, and churches.

Khayelitsha is home to roughly 400,000 people covering an area of 39 square kilometers made up of old formal areas and a majority newer informal areas. Red Cross partners have been working in the area and looked into the major concerns the community is facing. Fires are at the top of the list. Fires regularly occur as a result of indoor stove use, trash burning, faulty wires, and residents trying to keep warm. Rapid, unplanned development results in close construction of homes, which helps fires spread quickly. Pathways between homes are narrow and often blocked, making evacuations chaotic and dangerous. Residents commonly do not know who to call for firefighting assistance, and if firefighters are available, they have a difficult time finding and responding to fires. 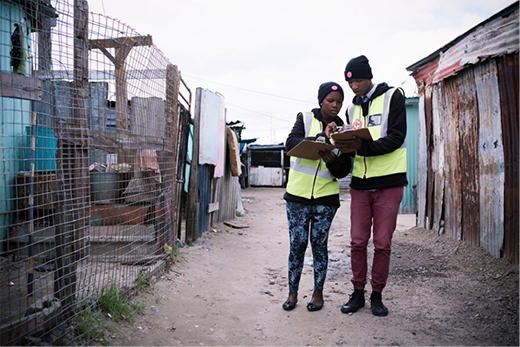 Volunteers using Field Papers and GPS to collect local data that will be used for programs and added to OpenStreetMap. Copyright American Red Cross.

Red Cross partners are piloting a project to solve this issue: a low-cost, meshed network of smart home sensors affixed to each home within the informal settlement. The American Red Cross GIS team recently set out to Khayelitsha to support the community in mapping the area for better program planning and decision making. Remote tracing was done ahead of time by digital humanitarians around the world using OpenStreetMap and this was hugely beneficial, giving us a fairly accurate foundation of data to add to.

Volunteers on the ground were trained to add local data such as street names, house numbers, points of interest, and water sources among other features. The area is now full for relevant information, not just for this project, but data is being used by other humanitarian organizations working in the area and more importantly the community living in Khayelitsha. The American Red Cross GIS has created large maps of the different sections to print and share with the communities. The volunteers are continuing to gather data, collecting the locations of the fire sensors to then overlay OSM data to analyze the coverage of the project.

Tomáš Mišura: thanks a lot for this tutorial, I use something similiar but ..

NERO: now after this how to save it on the DATABASE? LOCALLY. MONG ..