The open source ecosystem grows every day, and with the proliferation of mobile devices around the globe, perhaps never has it been more important than now to make sure that phone and tablet users get access to the same high-quality open source software options that desktop users have long enjoyed.

I want to take you through some of the many open source options for mobile apps that you have available to you on Android devices, and today, we start with open source apps for drawing. For those of you on an iOS device, you may be able to find an equivalent for your device as well, but the Apple ecosystem does not lend itself to applications outside of its walled garden, so your luck may vary.

Whether you’re a serious artist, a doodler, or simply someone who wants to provide a few apps to entertain your kids, we hope you’ll appreciate these entertaining picks. They’re not the GIMP or Inkscape (although you can find those packaged for Android as well), but they all make use of touch input in creative ways. 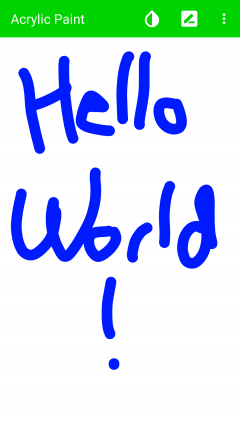 Acrylic Paint is perhaps the simplest of simple drawing applications. You can select color, brush size, and three different brush techniques: bold, blur, and pencil. Aside from basic interfaces for saving and sharing, that’s about it! While this may seem so plain to be of little value, the simplicity makes it a great application for kids (or for those, like me, who get distracted when presented with too many bells and whistles).

The source code for Acrylic Paint is available on GitHub and it’s licensed under the GPLv3.

Droid Draw is a different kind of drawing program. Rather than drawing directly, you control a pen using a set of simple drawing commands modeled on the LOGO language. LOGO is a beginner-friendly language which introduces newcomers to the world of programming through simple command of movement, drawing, and intentional repetition. Dating back to the 1960s, LOGO is a great first language for kids, and may bring back feelings of nostalgia to many adults.

You can find Droid Draw’s source code on BitBucket, which is licensed as open source under the Apache 2.0 license. 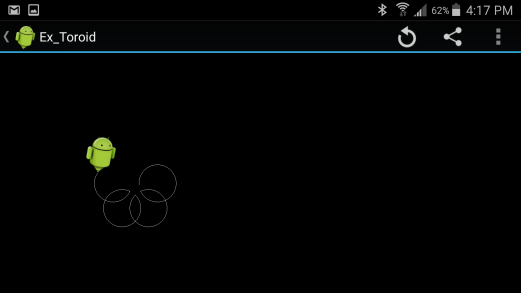 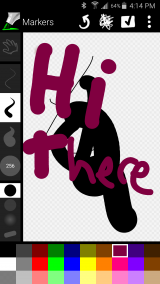 Markers is a simple drawing program similar to Acrylic Paint above, but with perhaps slightly more options. What sets Markers apart, however, is that it can take advantage of capacitive screens. Capacitive screens are those capable of measuring difference in pressure from your finger or stylus, allowing you to push harder for a thicker line or more lightly for a thinner one, not all that differently than the way one expects drawing to work with analog equivalents like pencils and paint brushes in the real world. You must have a capacitive screen to take advantage of this feature (hint: most phones don’t have one), but the app still works fine even for those with ‘normal’ screens.

The source code for Markers can be found on GitHub under an Apache 2.0 license. 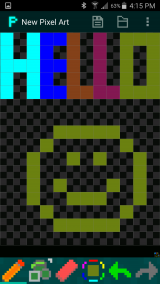 Pixelsque is an application specifically designed for drawing and editing pixel art: If you have ever wanted to recreate your favorite 8-bit video game characters from the 80s (or perhaps design your own for the next hit indie game of the 10s), this is the application for you. The interface is incredibly easy to use, with a pen and basic shape-making abilities, along with basic abilities for color selection, undo/redo, etc.

You can find the source code for Pixelsque on GitHub, which is licensed for distribution under a BSD license.

The final item on my list is Tux Paint. Tux Paint, a drawing program for kids, is the most full-featured drawing program in our list, modeled after its desktop cousin. Tux Paint lets you draw with brushes, stamps, lines and shapes, text and labels, and many, many special effects. If your creative energy is best assisted by having lots of different tools out of the box, this is the drawing program for you.

One word of caution: Tux Paint is, by far, the largest of the applications on this list, taking up valuable space, and may take a while to load. If you’re after it’s feature set, or are a fan of the desktop version and want it on mobile, go for it. Otherwise, you may be better served trying out some of the others on this list.

Tux Paint is available under the GPLv2, and the source code of the Android port can be found on GitHub. 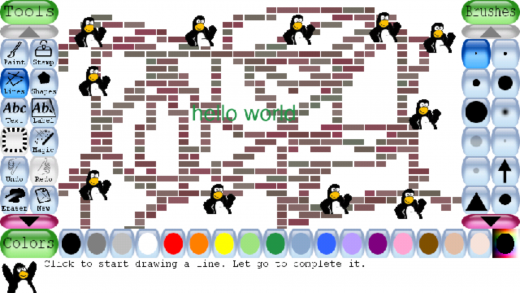 All of these applications and many others are available for download from F-Droid, a repository of free and open source applications for Android which also provides a client for installing them to your phone, tablet, or other Android device. Many of the apps may be available in other repositories and app stores, including the Google Play store and its Amazon equivalent. Advanced users can also install .apk files for many of these applications directly to their phones, although default security settings often prevent this (for good reason), so be sure that you understand what you’re doing before you install an unvetted .apk to your device.

Did I miss a favorite open source Android drawing application on this list? Let us know in the comments below!