Wearable electronics have exploded in the past year. Countless small devices are now on the market for not only fitness tracking, but posture improvement, sunscreen reminders, muscle-sensing gesture control, and much more. As technology on the body becomes more pervasive than ever, having open source tools for developing wearable technology is more important than ever, so that we can create the future of fashion tech while maintaining data privacy of biometric sensor data.

FLORA v2 (and Getting Started with Adafruit FLORA) 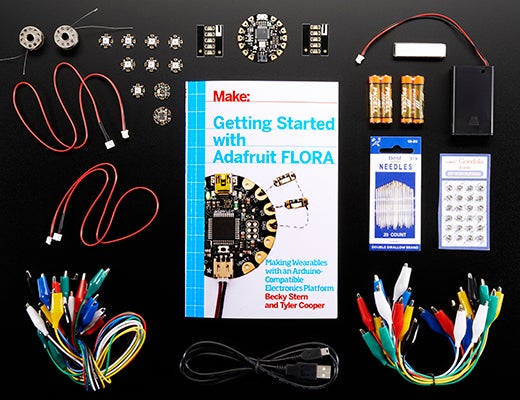 The FLORA wearable microcontroller got a hardware upgrade this year, adding a micro USB port and onboard programmable NeoPixel for prototyping color-changing, Arduino-compatible code before ever connecting it up with conductive thread or wire. 2015 also brought Getting Started with Adafruit FLORA, the beginner’s guide to wearable microcontroller projects.

The book covers the basics of the FLORA family of parts, tools, and techniques, and three projects to get you started, including textile switches, dance-activated lights, and a DIY GPS watch. There’s a FLORA Book Pack available with parts used in the book, and more for building the dozens of other open source FLORA tutorials available on the Adafruit Learning System.

One recent project made with FLORA is the SMSsenger Bag—an addressable LED matrix displaying text messages it receives to its onboard FONA open source cell phone module. Developing wearable devices that communicate wirelessly is tremendously fun and rewarding, and the open source Arduino libraries for FONA and NeoPixels make it simple for beginners, students, and hobbyists to get started creating personal area network wearables.

On the topic of networked wearables, the FLORA Bluefruit LE debuted in 2015. This sewable bluetooth low energy module makes it easy to connect wearables to your phone or tablet for controlling, for example, the color of the LEDs in your dress, and also pushing sensor data to cloud services like adafruit.io. Build around the Nordic nRF51822, the FLORA Bluefruit LE module can also act as an HID keyboard or UriBeacon. The Bluefruit family of boards works great with the (also open source) Adafruit Bluefruit LE Connect apps for Android and iOS.

Zac Posen “Made with Code” dress

This year, Google teamed up with Zac Posen as part of their Made with Code initiative to create an LED dress with animating patterns coded by girls all over the world. Maddy Maxey helped bring the dress to life and documented its hardware construction (using FLORA and NeoPixels) in an Instructable about the project, which debuted on the runway of New York Fashion Week. 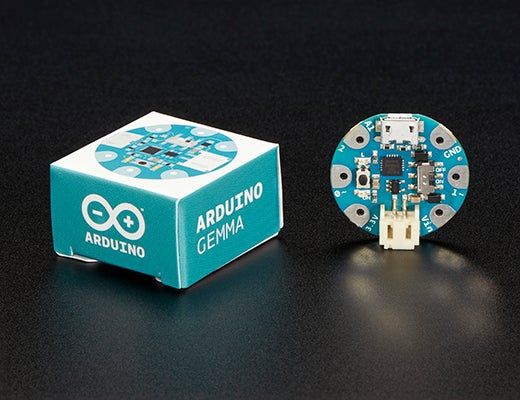 FLORA’s not the only board that saw a makeover this year—its little sister GEMMA got a micro USB port and on/off switch and debuted its new blue cousin, the official Arduino GEMMA. This tiny board built around the ATtiny85 microcontroller can control NeoPixels, read simple sensors, and is small and low-cost enough to easily embed in wearables projects. While you can get GEMMA v2 in Adafruit or Arduino flavors, the official partnership provides native support for Arduino GEMMA in the Arduino software IDE, boxed packaging, and best of all supports Arduino.