Sanoid helps to recover from what I like to call “Humpty Level Events.” In other words, it can help you put Humpty Dumpty back together again, on ZFS filesystems. 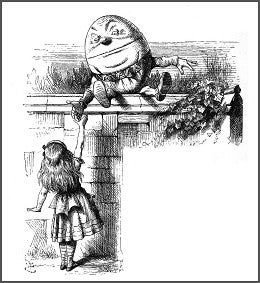 As a child, long before I read Lewis Carroll’s books, I knew this snatch of doggerel from Mother Goose’s nursery rhymes by heart. Humpty Dumpty’s fall is probably the best-known nursery rhyme in the English language. Why is this simple verse so popular?

It outlines a fear, and an experience, common to everyone: some seminal, horrible event happened, and in the space of a moment there was no going back. What had been order became chaos, and there was no way to restore it. It sucks, but it’s a basic part of the human experience; you can’t put an egg back into its shell, you can’t unsay the mean thing you said to your friend, and you can’t undo the horrible mistake you made on your computer.

Maybe you clicked the wrong link or the wrong email attachment and a cryptomalware payload executed. Or maybe a bad system update came in from your operating system vendor and bricked the boot process for your machine. (I haven’t actually seen this particular thing happen under Linux, but it happens with depressing regularity to those of us who manage enough Windows servers.) Perhaps a mission-critical application needed an upgrade, and the vendor emailed you a 150-page PDF with instructions, and it all went south on page 75. Heck, maybe you paid the vendor to do the upgrade and it all went south on page 75.

Like most of the computing experience, none of these things are truly new. They’re all just rewritings of Humpty’s parable. Entropy happens.

You can’t unscramble the egg. (Or can you?)

If you’re a *nix person, rm -rf / is as apocryphal a tale as Humpty’s fall itself. You may never have done it yourself, or even seen it done in person. We’ve all at least heard the stories, though, and cringed at the thought. GNU rm even added a special argument, --no-preserve-root, to try to make it a little more difficult for fast, clumsy fingers to wipe out the system! That still doesn’t stop you from accidentally nuking all sorts of important things that aren’t root, though: /bin, /var, /home… you name it. (I accidentally destroyed /etc on an important system once. Once. And let us never speak of it again.)

In the most prosaic sense, Sanoid is a snapshot management framework. It takes snapshots of ZFS filesystems, it monitors their presence, and it deletes them when they should go away. You feed it a policy, such as “for this dataset and all its children, take a snapshot every hour, every day, and every month. Keep 30 hourlies, 30 dailies, and 3 monthlies”, and it makes that happen for you.

But forget the prose, and let me get a little poetic with you for a moment: Sanoid’s real purpose is to rewrite the tale of Humpty’s fall.

I used to get a feeling of existential dread when I’d see certain clients’ names on my caller ID. There were days where I spent hours trying to pull arcane rabbits out of my hat to rescue broken systems in-place, fielding unanswerable how much longer? questions from anxious users, wondering when it was time to abandon the in-place rescue and begin the laborious restore-from-backup.

Of course, the only thing worse than “we accidentally borked the whole server” is, after you’ve finished your restore process, hearing that plaintive cry: “Where is SuperFooBarApp? It’s mission critical!” … and SuperFooBarApp is something the client installed themselves, six months ago, and never told you about. And it was outside the scope of your backup process, and now it’s. Just. Gone.

Sanoid was the thing I built out of sheer desperation, to make all of that stop happening. And it works! By doing the Real Worktm on virtual machines which are being snapshotted hourly, and keeping the underlying bare metal clean as a whistle, running nothing but Sanoid itself, there is no such thing as a Humpty Level Event any more. Cryptomalware incursion? Rollback. Rogue (or even malicious!) user deleting giant swathes of data? Rollback. Bad system updates hosed the machine? Rollback. Client stealth-installed SuperFooBarApp six months ago in some squirrely location using some squirrely back-end db engine you’ve never heard of? Doesn’t matter; the snapshots are whole-disk-image, it’s on there.

In super technical business-y planning terms, using Sanoid makes my recovery point objective (RPO) 59 minutes or less, and my recovery time objective (RTO) roughly 60 seconds from the time it takes me to get to a keyboard. In less technical person-who-has-to-fix-it terms, it means I can always make the client happy, and it means that my day got a whole lot more predictable!

All you need is one single-line cron job, and a simple, easy to read TOML configuration file.

The Least Expensive Way to Shoot Underwater in a Pool

Mike Lerner: "no matter what he or she is trying to create" cmo ..

Flying RC: What is this music track?? ..

Gema Anggada: Hi, I want to ask what is the background music name ? Or who ..