This tripod has been around for quite a few years and its unique mix of features has won awards for design. Let’s check out what this relatively affordable tripod has to offer.

Choosing a tripod is an investment that has to be carefully considered. A tripod is both a creative and a protective tool for your cameras, and finding the perfect one will affect the quality and efficiency of your work for a very long time. As you progress as a photographer, one of the crucial things that you should develop is a certain level of mastery and awareness of your workflow, and part of that is the logistics, which are just as important as the moment you press the shutter.

Stability and durability should be the bare minimum for any tripod. A tripod that can’t secure your precious camera gear shouldn’t even be considered. At the same time, a tripod that will only last a few weeks or months will always be a waste for a serious photographer. Once those crucial attributes are assured, then factors such as portability, versatility, and other extra features come in. All these features create the entire package that may or may not fit who you are as a photographer. Your tripod of choice, especially the one that you would invest hard-earned money in, should fit you like a glove.

This tripod is a combination of features found on multiple lines of Manfrotto tripods that serve varying purposes. This standard size tripod brings together the portability of various travel tripods, as well as the sturdiness and build of more heavy-duty support gear. This way, it offers a very efficient middle-ground between the contrasting attributes of popular tripod variants. The Manfrotto 190go! was actually released around six years ago; however, the features put together on this tripod definitely makes is something worth looking at even over half a decade after. 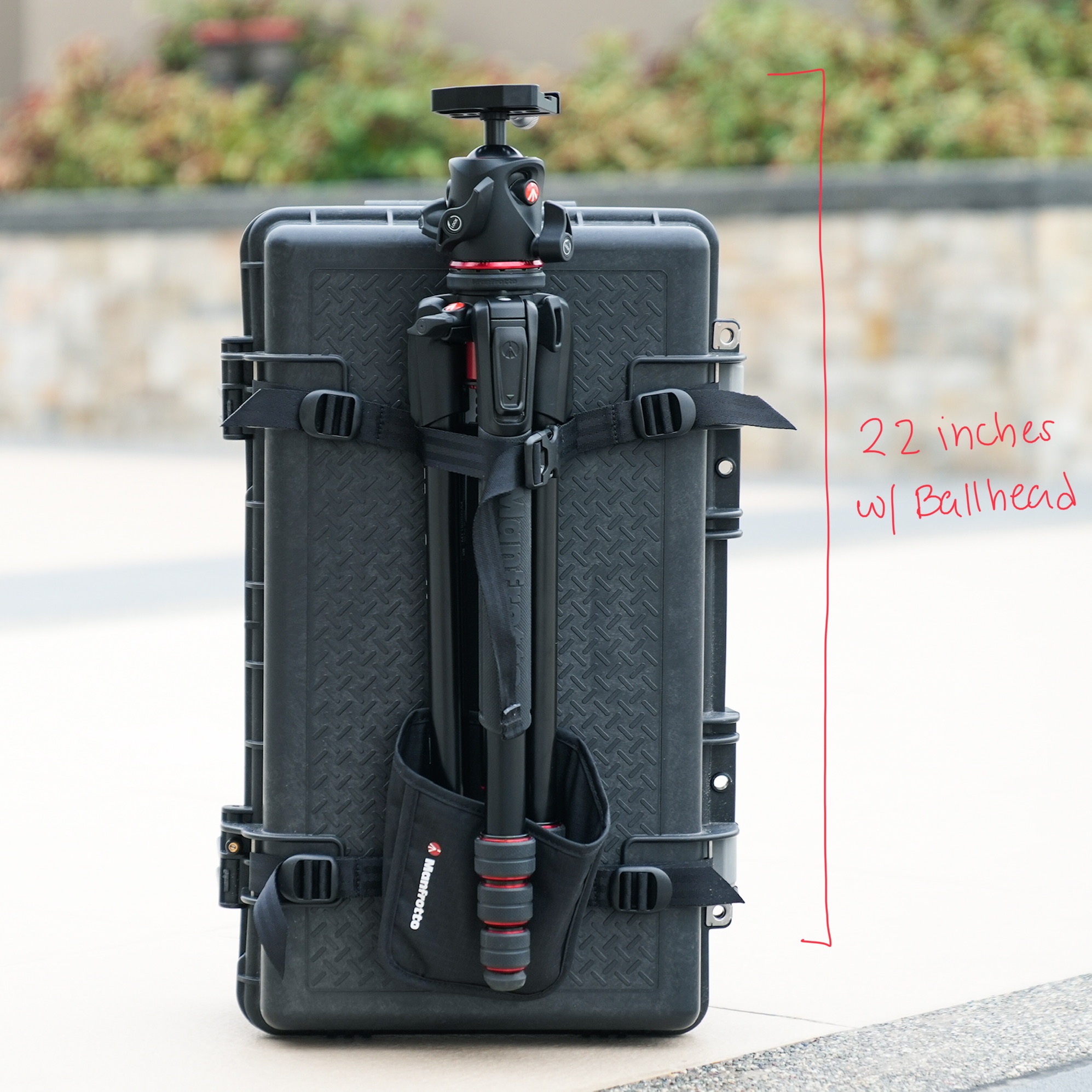 The Manfrotto 190go! comes in at just 17 inches when folded without the head. In its shortest neutral position, it is 22 inches tall on average with various head options. With the three legs abducted to nearly 180 degrees and the horizontal center column extended, this versatile tripod can achieve a minimum ground clearance of just 3.5 inches, which can be quite a helpful tool for very low-angle shots. 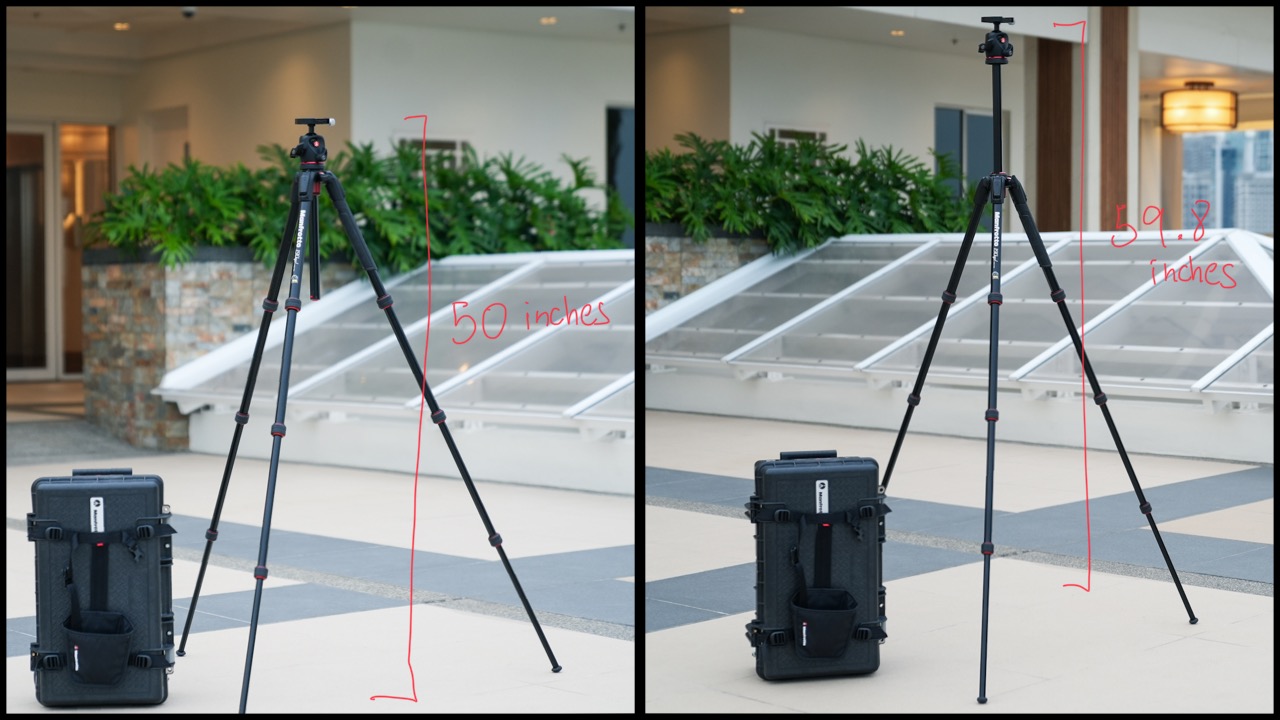 With the four-section legs fully extended, the height of the tripod is at 50 inches and reaches 59.8 inches with the center column extended to the maximum working limit. The aluminum variant weighs a mere 1.66 kilograms, while the lighter carbon fiber version weighs 1.35 kilograms. Both variants can comfortably carry up to 15 kilograms of camera gear, which virtually encompasses the combined weight of most full frame DSLR or mirrorless cameras with standard 70-200mm telephoto zoom lenses. 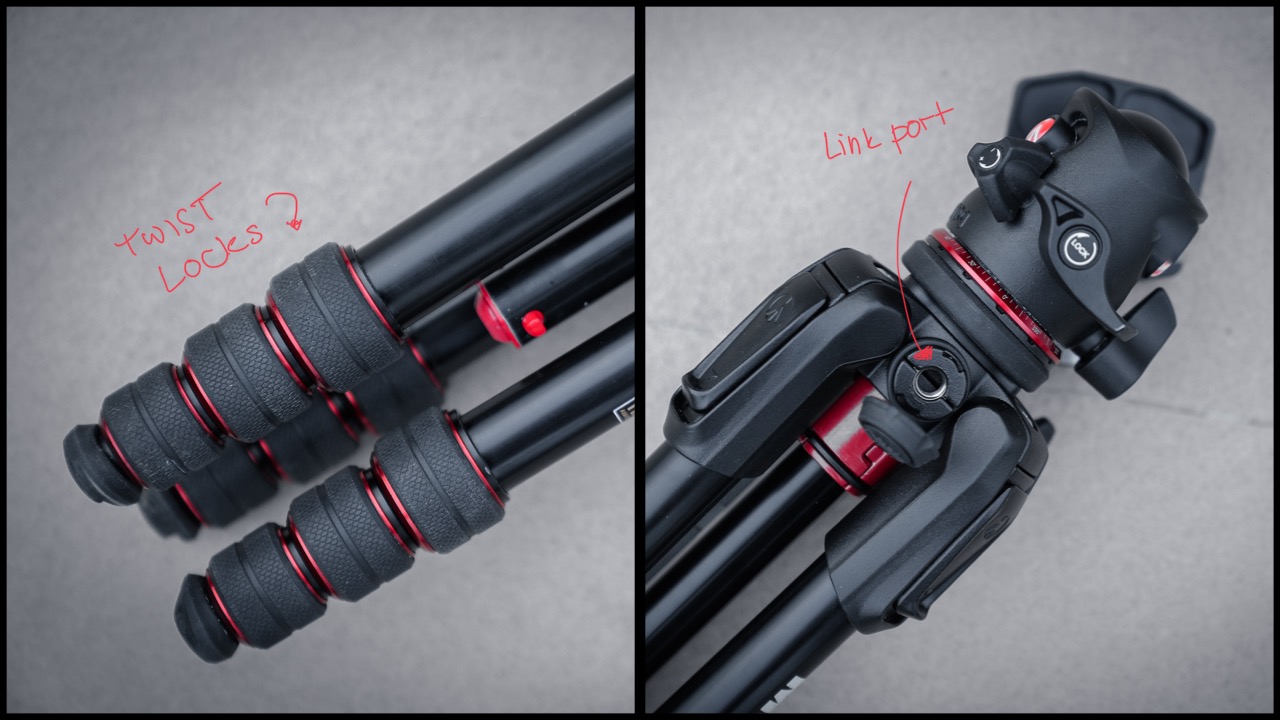 The center column pulls up and can be unlocked entirely with a button at the bottom that releases it into the joint that allows the column to go from vertical to horizontal. When unlocked using the single knob that controls the center column, this central assembly can rotate 360 degrees to adjust to the necessary angle. On the opposite side of the knob is a removable rubber cover that reveals a 3/8” screw thread called the “Link Port” that serves as an additional port for attachments such as straps, handles, friction arms, or even other tripods. This port virtually expands the carrying capacity of the tripod as it can accommodate for portable accessories such as lights, modifiers, or audio gear. 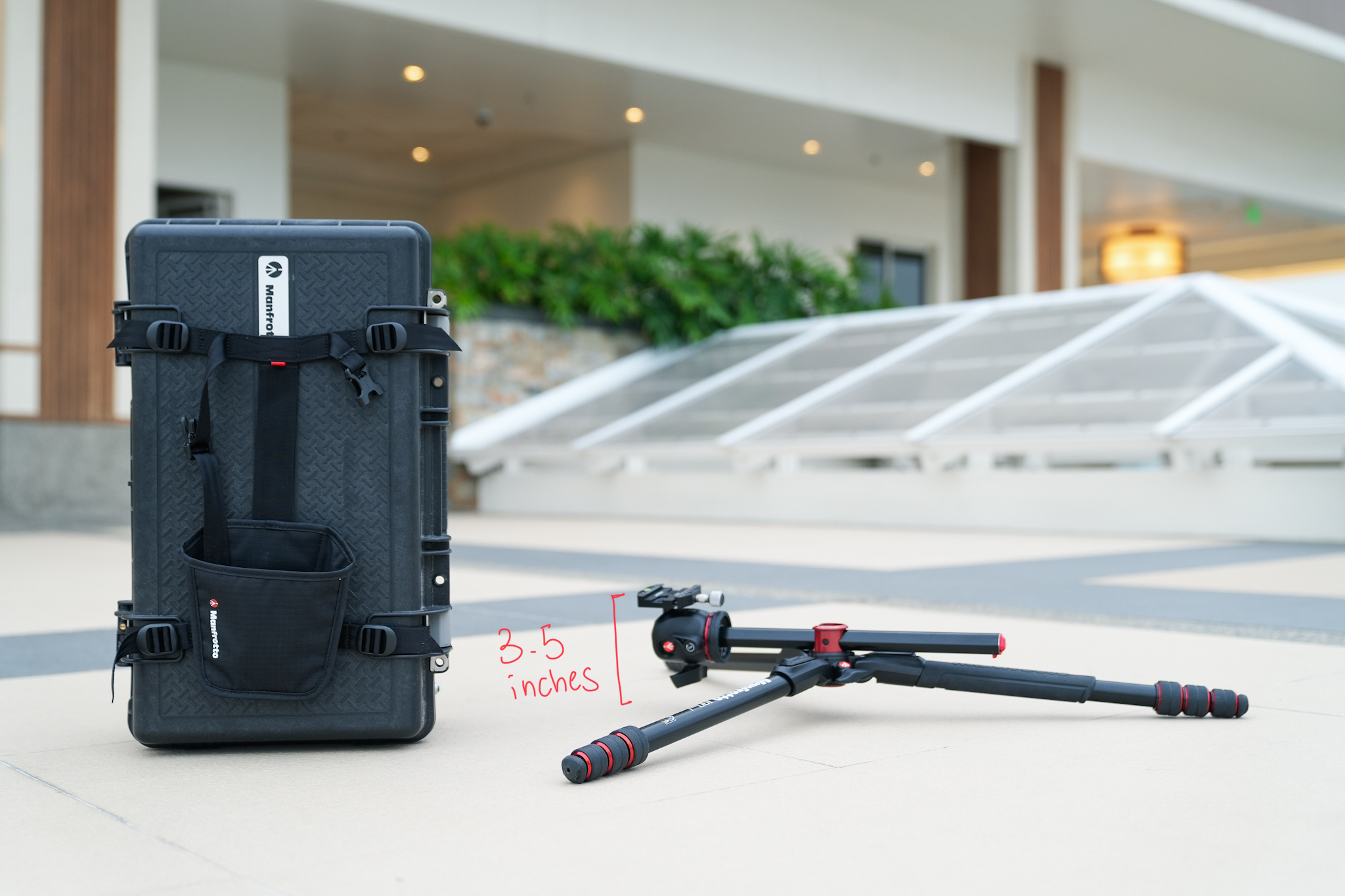 The legs features twist-lock mechanisms more typically found on smaller travel tripods. While some photographers say that this kind of leg locking mechanism can take a bit more time to set up, the relatively thinner form (compared to twist locks) definitely add to the portability of the tripod.

The Manfrotto 190go! is sold in stores either without a head, with a more compact 494 head similar to those seen on Befree travel tripods, a 496RC compact ballhead, a BHQ2 head for heavier payload, or the Xpro 3-way pan-and-tilt head. Nonetheless, it is compatible with almost all removable ball head with the standard 3/8” screw thread.

While the various options for ballhead packages definitely make it more flexible and appealing to users depending on their preferences, the variants available as kits with the legs do not include the more universal X-Pro BHQ6 which features an Arca Swiss type quick release clamp for compatibility with most camera plates, cages, and L-brackets. For my personal use, I replaced the quick release clamp with one that fits Arca Swiss type plates.

The Manfrotto 190go! comes in the perfect size for a staple all-around tripod. It comes with quite the significant payload capacity while in a relatively compact and lightweight form. This makes it a good option as a general studio tripod for portraits, products, food, and even vehicles. In addition, this would fit quite well in the workflow of commercial product or food photographers who might want the camera pointed securely over the products on a table for a flat-lay setup. With the proper configuration of the legs and the horizontal column, the 190go! can hold the camera more securely to maintain the overhead perspective. 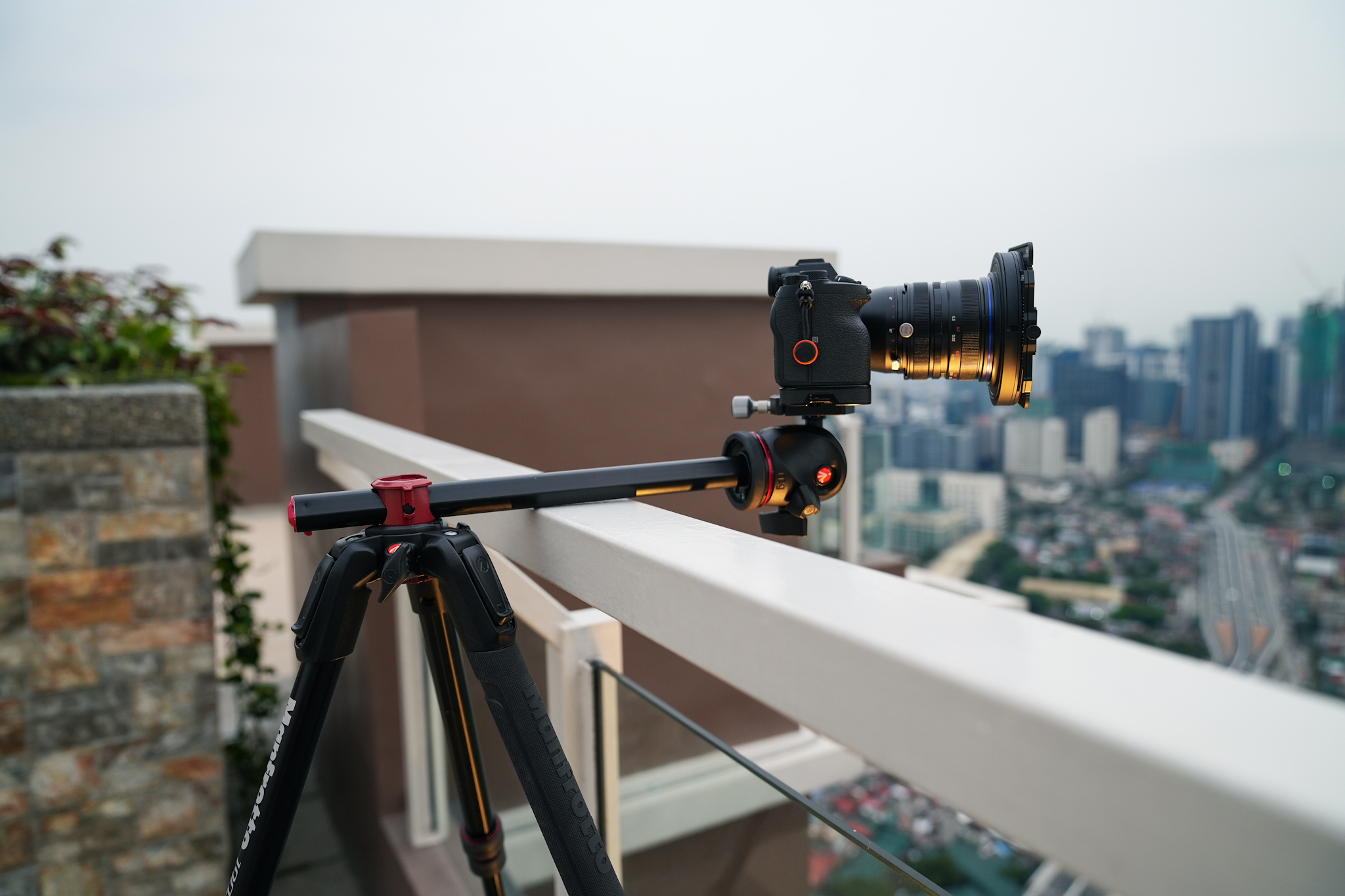 As a landscape photographer, the application of this tripod in what I shoot is definitely what got me interested in purchasing this tripod for myself. The relatively slimmer folded form makes it easy enough to carry during a long trek but does not get in the way with the carrying capacity. The payload can carry a full-frame camera with almost any lens commonly used for landscapes from ultra-wide to telephoto range. The horizontal column makes it possible to get low enough the crucial foreground elements for low-angle shots, and can also help position the camera beyond obstacles such as ledges and railings when shooting from elevated vantage points. 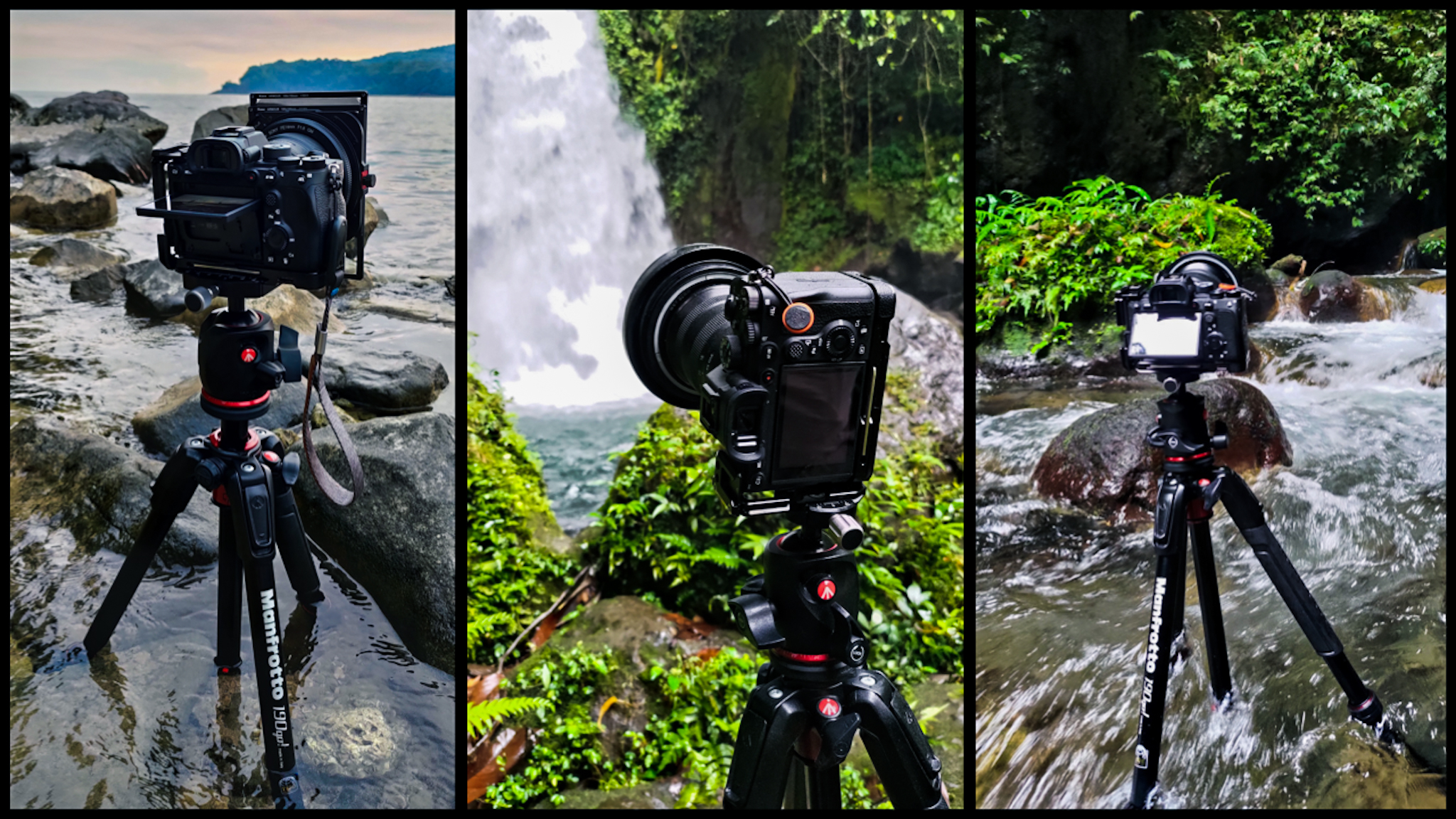 Though the Manfrotto 190go! has been in the market for over half a decade, it still offers a unique mix of efficient weight and height along with reliable stability. The additional features such as variable angle legs, the horizontal center column, and the link port make it a strong, versatile option to almost any kind of photography workflow.

What Can Be Improved