The new season of Photographing the World 3 behind the scenes is now in full swing! In this week’s episode, the gang heads down the Amalfi Coast and settles into the small town of Atrani. Here Elia Locardi teaches something I didn’t think was possible: capturing star trails in a light polluted town. Of course, our food adventures continue but we also share some of our photography tips for getting great time-lapses straight out of camera. Oh, and yes Donald Trump takes his oath of office.

Before heading out to Italy, Lee and I picked up a few Panasonic LX-100 cameras. These “professional point and shoot cameras” are interesting because they can create 4k time-lapses directly in camera. Furthermore, they also allow you to pause the time-lapse process, move your camera to a completely different location, and continue capturing new scenes without losing precious time building the video file. This is handy when filming sunset or other time-sensitive events where you want to capture as many scenes as possible but you don’t want to have to wait five to ten minutes waiting for the camera to process the video. Some cameras like the Nikon D500 and D850 actually build the video file as the images are taken, which means you can cut the camera off and instantly have a perfectly rendered timelapse file. The drawback to using a DSLR is they are huge and not fun to carry around when casually walking the streets.

While the LX-100 solved the problem of us not having to carry a large DSLR with us everywhere we went, we still needed a tripod to create stable time-lapses. In the Charleston airport, Lee found these “toy” Polaroid mini tripods that actually worked out perfectly for our small point and shoot cameras. Upon testing a few time-lapses in the airport, we went back and bought a second tripod just for this trip. After a few months of traveling with them, we realized these tripods, although cheap, aren’t actually built for the road. As you will see in future behind the scenes episodes, we visited BH Photo in NYC and found the Manfrotto 709B to be the absolute best tabletop tripod but shockingly this Polaroid did pretty well considering it’s size and cost.

In Atrani, Elia wanted to teach two specific lessons. The first lesson was about scouting a city that has a bunch of different compositions and lookout points. This worked out well in Atrani because you can literally shoot this small town from about four different locations including a high overlook up on the mountain that places the city against the Mediterranean Sea. The second and most interesting lesson was how to successfully capture star trails in an environment that contains a lot of light pollution. Obviously, in massive cities like Dubai or New York it would be impossible to record the faint light given off by stars, but in a small town like Atrani, Elia was able to share a few unique tricks that helped pull out detail from the sky while suppressing light pollution in the foreground. You can see the before and after of his landscape photograph below. 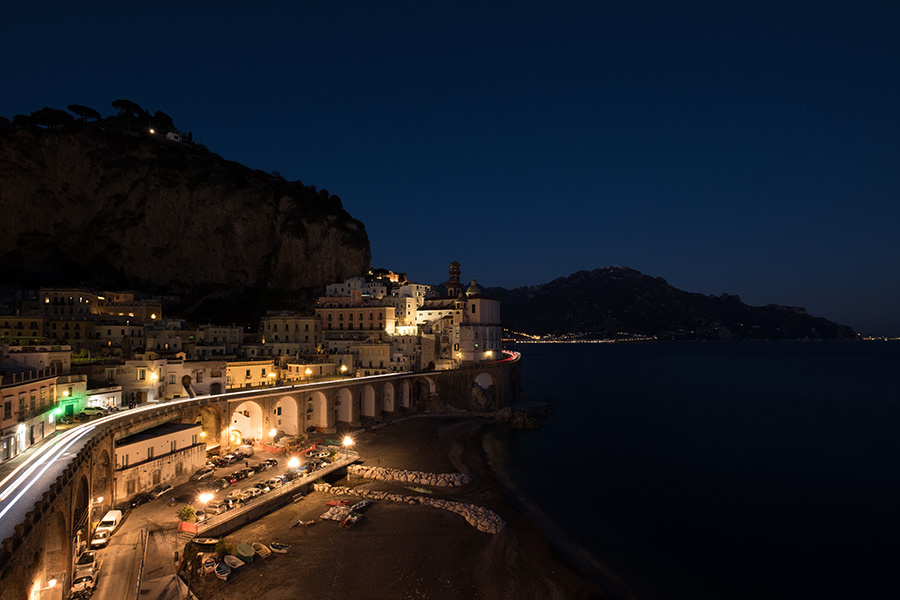 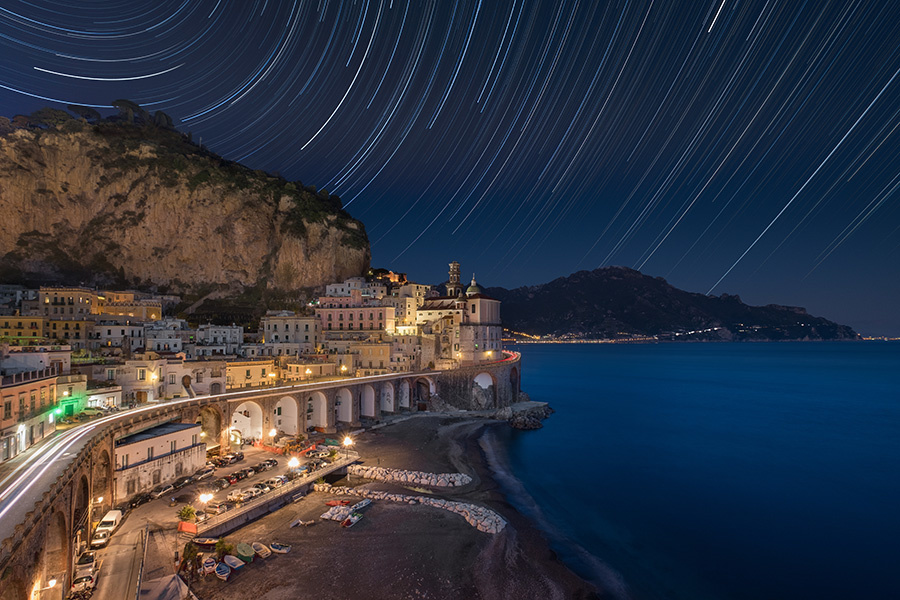 In the end, Elia wound up using 360 total star shots to get the final photo above. By blending in all of these individual star photos in Photoshop, Elia was able to not only capture the beauty of the blue hour in Atrani but also the amazing view of the heavens. Of course, it also helps to have a clear sky so weather and clouds do not obstruct the view.

Make sure you subscribe to our YouTube channel for future episodes of Photographing the World and check out the full Behind the Scenes Playlist to watch the entire series. Next week we will be leaving the Amalfi Coast and heading to one of the most interesting mountain towns I have ever seen: Peitrapertosa.

For more information about the entire Photographing the World 3 series, check out the promo video below or head over to the Tutorial Page on Fstoppers.com.