How to use Python to hack your Eclipse IDE

The Eclipse Advanced Scripting Environment (EASE) project is a new but powerful set of plugins that enables you to quickly hack your Eclipse IDE.

Eclipse is a powerful framework that can be extended in many different ways by using its built-in plugin mechanism. However, writing and deploying a new plugin can be cumbersome if all you want is a bit of additional functionality. Now, using EASE, there’s a better way to do that, without having to write a single line of Java code. EASE provides a way to easily automate workbench functionality using scripting languages such as Python or Javascript.

In this article, based on my talk at EclipseCon North America this year, I’ll cover the basics of how to set up your Eclipse environment with Python and EASE and look at a few ideas to supercharge your IDE with the power of Python.

The examples in this article are based on the Java-implementation of Python, Jython. You can install EASE directly into your existing Eclipse IDE. In this example we use Eclipse Mars and install EASE itself, its modules and the Jython engine.

And, select the following components:

This will give you EASE and its modules. The main one we are interested in is the Resource module that gives you access to the Eclipse workspace, projects, and files API. 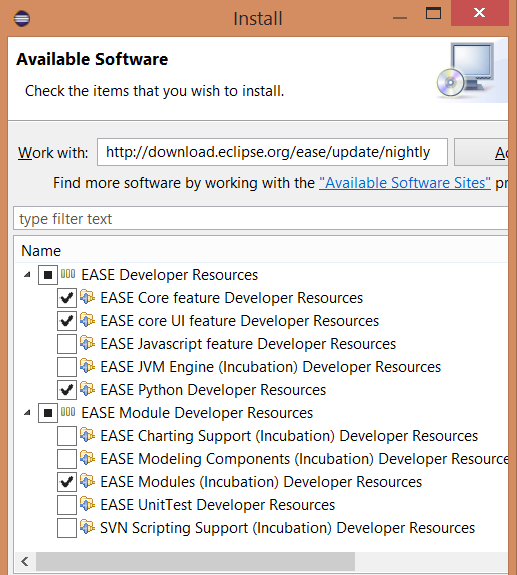 After those have been successfully installed, next install the EASE Jython engine: https://dl.bintray.com/pontesegger/ease-jython/. Once the plugins are installed, test EASE out. Create a new project and add in a new file called hello.py with this content:

Select the file, right click, and select ‘Run as -> EASE script’. You should see “Hello World” appear in the console.

Now you can start writing Python scripts that can access the workspace and projects. This power can be used for all sorts of hacks, below are just a few ideas.

Maintaining good code quality can be a tiresome job especially when dealing with a large codebase or when lots of developers are involved. Some of this pain can be made easier with a script, such as for batch formatting for a set of files, or even fixing certain files to remove unix line endings for easy comparison in source control like git. Another nice thing to do is use a script to generate Eclipse markers to highlight code that could do with improving. Here’s an example script that you could use to add task markers for all “printStackTrace” methods it detects in Java files. See the source code: markers.py

To run, copy the file to your workspace, then right click and select ‘Run as -> EASE script’.