It’s not just the price, which is considerably lower than any other camera in the market that gives the same quality. It’s a camera like no other, and its digital film footage is pure eye-candy every single time I get into the editing booth.

It’s easy to set up and use the camera. It’s intuitive and gives you real buttons to change settings while you’re shooting.

Other than that, it has physical buttons which, in my opinion, is much better than going through a menu while in a flow state. And it’s not just that there are customizable buttons, but the buttons that are set for accessing the menu, increasing frame rate, and showcasing false colors are ones I actually use, so it’s really built for getting the shot. 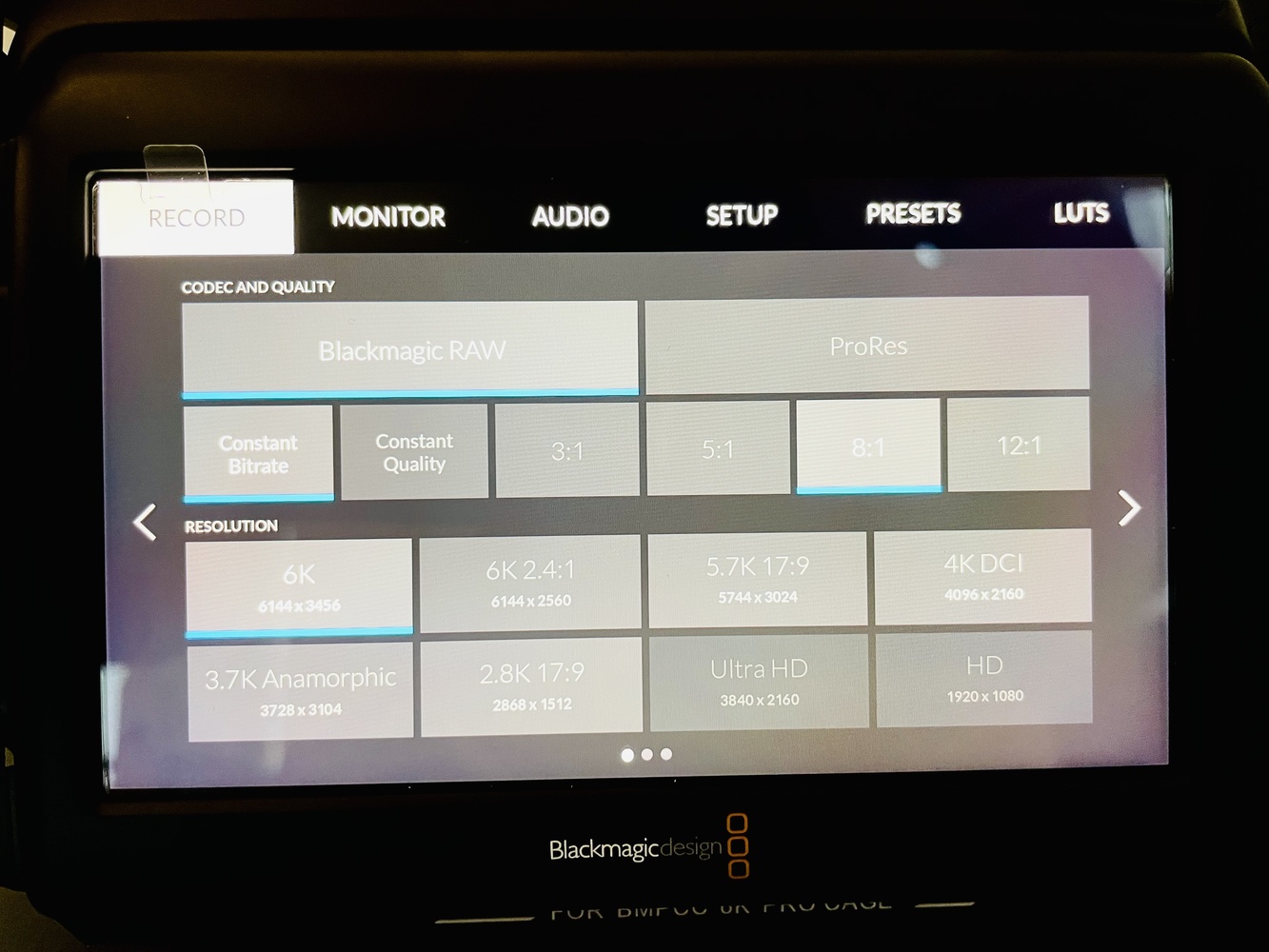 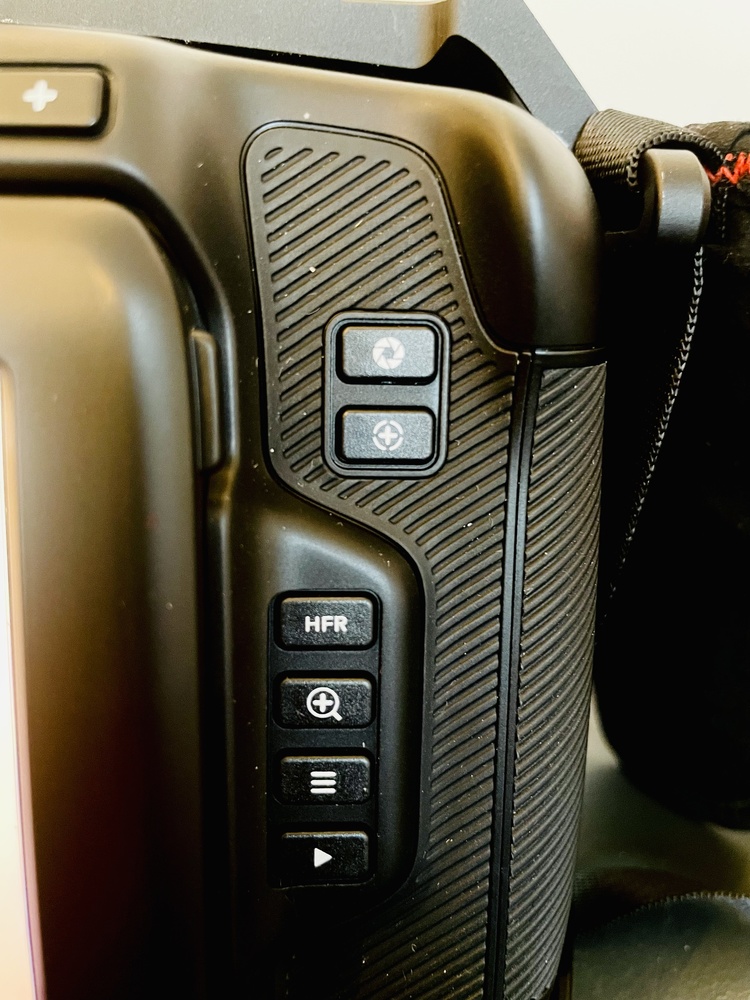 I can swipe right or left on the screen and choose the scene, take-number, and reel, which is captured in the title of the clip and metadata. That means organizing and going through the rushes are much easier to do than having to split it all up into folders and taking it from there. 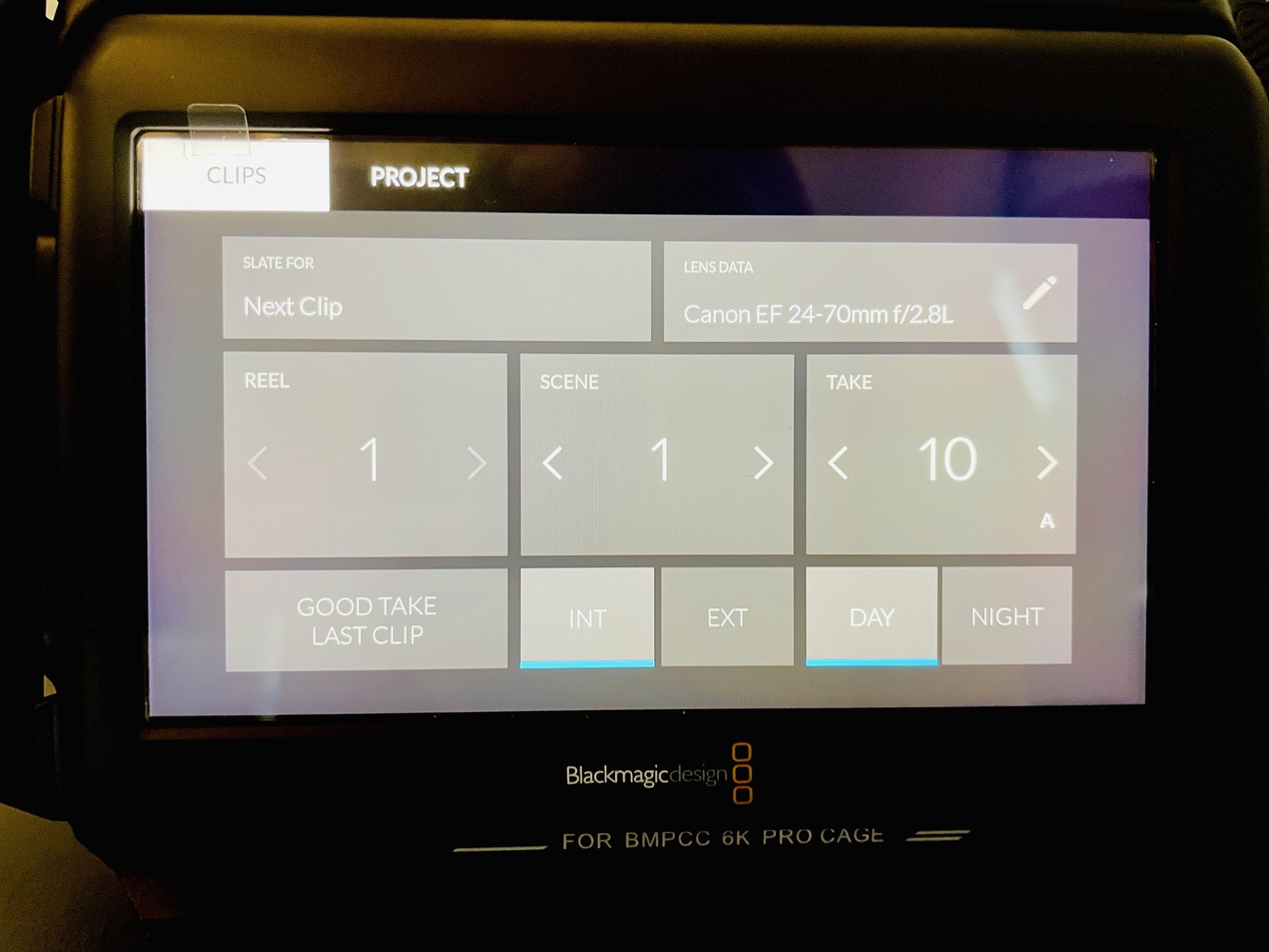 If you ask anyone to choose between a Japanese brand and an Australian brand when it comes to anything technological, they’d choose Japan, myself included. Brands like Sony and Canon are historical masters at giving the world great image capturing devices. I like the precision of Sony and what they are able to develop in their cameras and lenses.

There are alternatives like the Chinese Z-Cam which shoots high-quality footage, and options using old Canon EF lenses like with RED, although they’re moving on to RF mounts now. But here we have an Australian company, who are also the developers of DaVinci Resolve, an application that is used worldwide for coloring and finishing videos, who’s developed a camera that gives a video producer a camera and system they can use to do professional work. It should be noted that you get the software for free with any camera you buy from Black Magic Design. They know what’s needed to capture great digital film.

At first, I didn’t like the design of the camera’s body. It’s a DSLR template design. I like the idea of a box shape, similar to the RED, Z-Cam, and even the Sony FX3. With a box, it’s easy to rig up without a cage, whereas with the Pocket 6K Pro, if you want to use an external hard drive or add a follow focus, you’re going to have to get a cage. But, what I’ve learned from the process, is that I am now able to balance the camera with my right hand holding a well-designed, large on-camera handle, and with my left hand, holding the follow-focus knob. It’s great for stability when shooting hand-held, for this camera doesn’t have any IBIS. 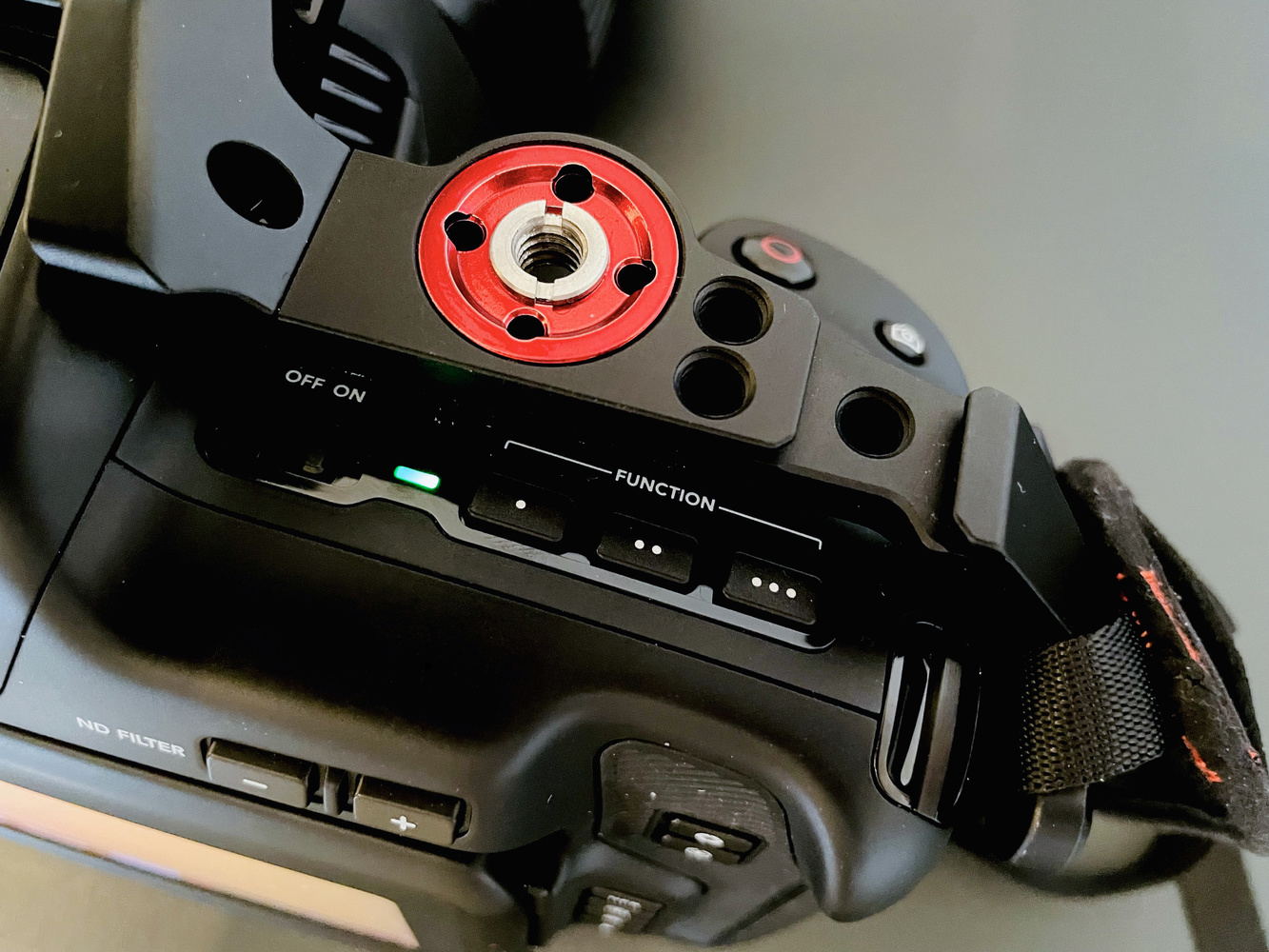 They’re built-in and can be added or removed instantly with two buttons. This means you don’t need a matte box or a screw-on variable ND filter on the front of the lens. It removes a hassle, which I appreciate.

If you get the Z-Cam or FX3 you’re going to have to get an external monitor or recorder to first see what you’re capturing, and secondly, to capture ProRes or raw footage. This 6K Pro has this built-in. And, the display is bright, folds out, and functions as my main monitor. When comparing the monitor to the one on the FX3, it’s an easy win. It’s rigid, whereas the FX3’s feel like it can snap off any second.

It’s pure greatness here. The footage melts like butter, and there really isn’t anything I can compare it to at the same price point. The digital film is what I think separates it from Sony and the others. I’ve heard that their sensors are made by Sony, so it must be their coloring knowledge that gives them this edge in the resulting footage.

Here is a montage I made to show what you get out of the camera. It was a cloudy day, so the colors and contrasts weren’t ideal. You also need to know that I am not a colorist, and that it was my first interaction with Da VInci Resolve, an NLE and coloring app I am starting to enjoy using. You might see some noise, and you might see some inconsistent colors throughout. It’s all part of the process.

Supporting the Democratization of Video

When you buy a camera, you support a certain company, idea, and philosophy. You are an ambassador of the camera you use. For me, it felt good to get the camera in a simple box with internal foam, knowing the company is trying to give me a great camera, while also cutting costs where possible to do so. And, as mentioned before, getting DaVinci Resolve Studio included in the purchase feels like I’m supporting something incredible.

It has the EF mount. So it’s ideal for someone who’s invested in the almost-vintage Canon lens ecosystem and wants to move into motion picture. Canon makes and has made great lenses, and as we all know, we buy the camera as a tool and invest in lenses. This digital film camera gives you the ability to keep these lenses. They have a new purpose, and you don’t need to feel left behind for not upgrading to the RF mount cameras or lenses. You can use what you have, which are great lenses to begin with.

I was first shooting with a 24-70mm f2.8 but realized that even if I held it as stable as I possibly could, I still got some jitters in the footage. It’s a fast lens, but it doesn’t have Image Stabilization. To solve this issue, I wanted to keep with a 24-70mm lens and knew that Canon also made an f/4 lens in the past, and that it also came with macro capabilities too. This lens also has image stabilization. Canon doesn’t make the lens anymore, so I got mine from eBay. DaVinci Resolve’s image stabilization is incredible, but this lens lets me get what I want, in-camera.

Not having AF, Eye-Tracking, or IBIS

I was a bit nervous about this aspect. I like getting the shot as quickly as possible and moving on. But with the follow-focus, I’ve realized how much focusing plays a role in telling the story. I am in complete control. It’s me telling the story in my way, and now it’s not just shutter angle, aperture, and ISO I set. It’s also the focus and hand-held stability that becomes part of my style of telling that story. I think the footage is therefore more organic, with a human-generated, and human-orientated experience when playing it back in post-production. Another aspect to note here is that this is how the big-time professionals do it. Sony might be developing their auto-focusing cine lenses, but the great directors out there would expect and want a focus-puller and DP to know how to tell the story with and by their own hands. 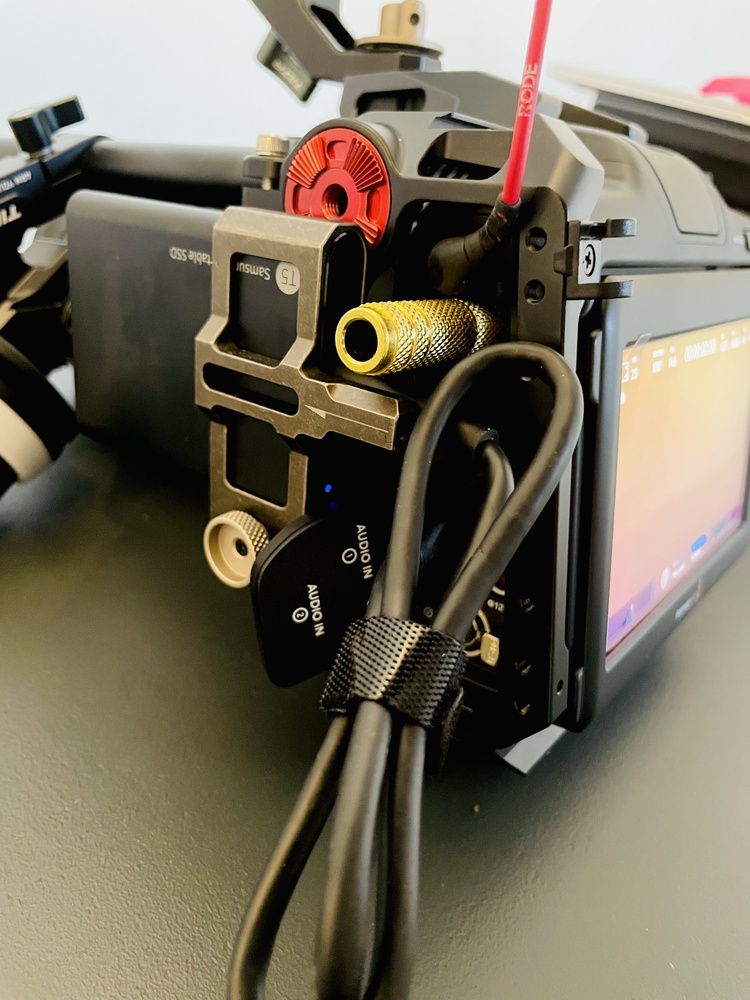 The Options Regarding Capturing Footage

Having the option of going directly to a hard drive means I don’t have to copy everything off, and I can even start editing on it if I wanted to. It’s also a much cheaper way to get going than having to buy CF or SD cards.

I’ve mounted a 1TB Samsung T5 hard drive to the Tilta cage, but I won’t recommend it. It’s important to go through the list of hard drives recommended by Black Magic Design to best suit your needs. If the data rate is too fast for the hard drive, you’ll have dropped frames which isn’t ideal. I’ve just ordered the 1TB Wise SSD to get the most out of the camera when recording to SSD.

Black Magic Design is a great name for a camera. It’s on par with RED, who calls the body of the camera ‘the brain’. But calling something a “pocket camera” when it’s too large to fit in any pocket, shouldn’t be a thing. It’s not a pocketable camera. What about just having Black Magic Cinema 6K Pro?

Having to edit the raw footage in DaVinci Resolve before I take it through to Final Cut is a round trip I’d like to skip. It’s possible to go directly into Final Cut with the Color Finale Transcoder, but at this moment in time, I need to consider switching to DaVinci Resolve completely. In the end, it might not be such a bad idea when considering handing the edit off to a colorist who will be using the same application to do their work, but it would be great to be able to have the BRAW footage go directly into Final Cut.

I can shoot in ProRes 4K, but that’s not the ultimate footage I can get from the camera, so it’s possible to go directly, but then I won’t have the best the camera has to offer.

At the moment I edit in Premiere Pro when it’s a team project, when I have to pass the edit along. But if I could choose, it would be Final Cut every time.

You get about 45 minutes per battery, which just isn’t enough. So you’re going to have to get the grip, add some additional V-mount batteries, or you’ll have to get the Anton Bauer Titon Kit. This means you’ll need to rig it up, which I believe wasn’t the idea. The one thing that uses a lot of battery power is the display. It would also be great to be able to change one of the function buttons to turn the screen off and on, so it saves some battery while you’re working on something else. Otherwise, you need to switch the camera on and off each time, which I think is impractical.

If you’re going to be shooting mostly in a studio environment, it is possible to keep it connected to a power outlet using the charging cable that comes in the box. So it can be the ideal setup for product videos. 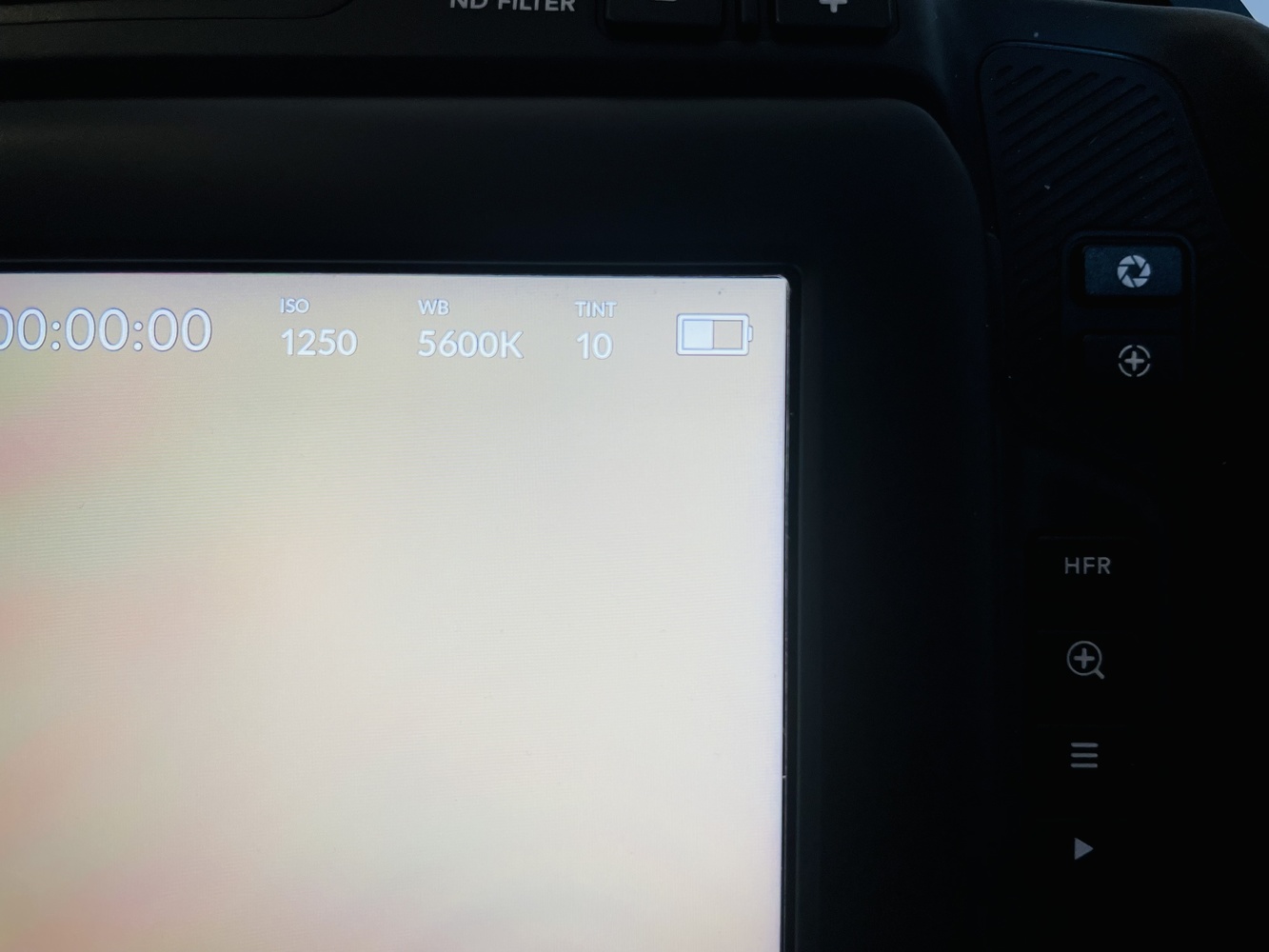 In my situation, this camera is almost perfect. I can use the lenses I already have without spending a serious amount of money. I don’t need to change to a different eco-system. I am learning how the pros work and can develop a style in that way, and can therefore offer myself to the industry as someone who won’t need auto-focus or IBIS to get the job done. And, when I do a personal project, it’s so much more rewarding going through the footage, knowing it was all my vision and that I brought it to fruition without AI.