Modern cameras and lenses are small marvels of consumer technology, and over the years, we have seen all sorts of features come and go along the journey to today’s products. Here are three features that never quite caught on that I wish would come back.

If you have never used a push-pull zoom lens, they work by replacing the zoom ring with a mechanism in which you push the lens forward to zoom in and pull it back to zoom out. They were especially useful before autofocus, as it meant you could change the focal length and focus the lens with one hand simultaneously. They have mostly fallen out of use, though you can occasionally find a lens with that design nowadays (the new Sigma 150-600mm f/5-6.3 DG DN OS Sports lens features a Dual Action Zoom system that has the mechanism). A lot of photographers did not care for them for a few reasons. First, poorly sealed copies of such lenses became dust magnets from the vacuum effect created by in-rushing air when zooming in. Second, they would often creep when the lens was pointed up or down. Third, many just did not care for the mechanism. And lastly, some had trouble zooming precisely with such lenses.

So, why did I like them? First, I think the push-pull mechanism is very natural: you move the lens toward the subject when you want it to be bigger and away when you want it to be smaller. Second, if you are someone like me, you frequently confuse the focus and zoom rings when reaching for one or the other, a problem that is obviated with this mechanism. Third, you simply cannot beat a push-pull lens for fast focal length changes. By the time someone zoomed from 100 to 400mm using a standard zoom ring, I could have completed the focal length change, framed my subject, and gotten at least one shot. As for zoom creep, most such lenses came with tension rings to eliminate that issue. If I had the choice, I would take a push-pull super-telephoto zoom over one with a ring 10 times out of 10.

I photograph a lot of classical music concerts, where you are given cough drops before the performance because any non-musical noise is met with dirty looks from annoyed audience members. As such, I can’t afford to make any noise — truly any noise. When I shot with DSLRs, this meant always using the silent shutter mode. It was never silent enough, though, even standing at the back of the hall, 80 feet from the stage. So, I had to draw on my musical knowledge to wait for loud passages in pieces to quickly snap off photos, but that was always a high stakes game, and it meant I had to ignore a lot of visually interesting moments because they simply were not loud enough to cover the sound of the shutter.

Switching to mirrorless cameras has largely solved this issue since I can just use the electronic shutter and fire away as much as I would like. However, electronic shutters are not perfect, especially when I’m photographing fast action, such as a violinist’s bow, which can often look weirdly curved due to the rolling shutter. With readout rates improving, this is not as big of an issue anymore, but for action, mechanical shutters still reign supreme. However, I have never seen a camera whose mechanical shutter was quiet enough to freely photograph a classical music concert, except for one, and it is 30 years old! 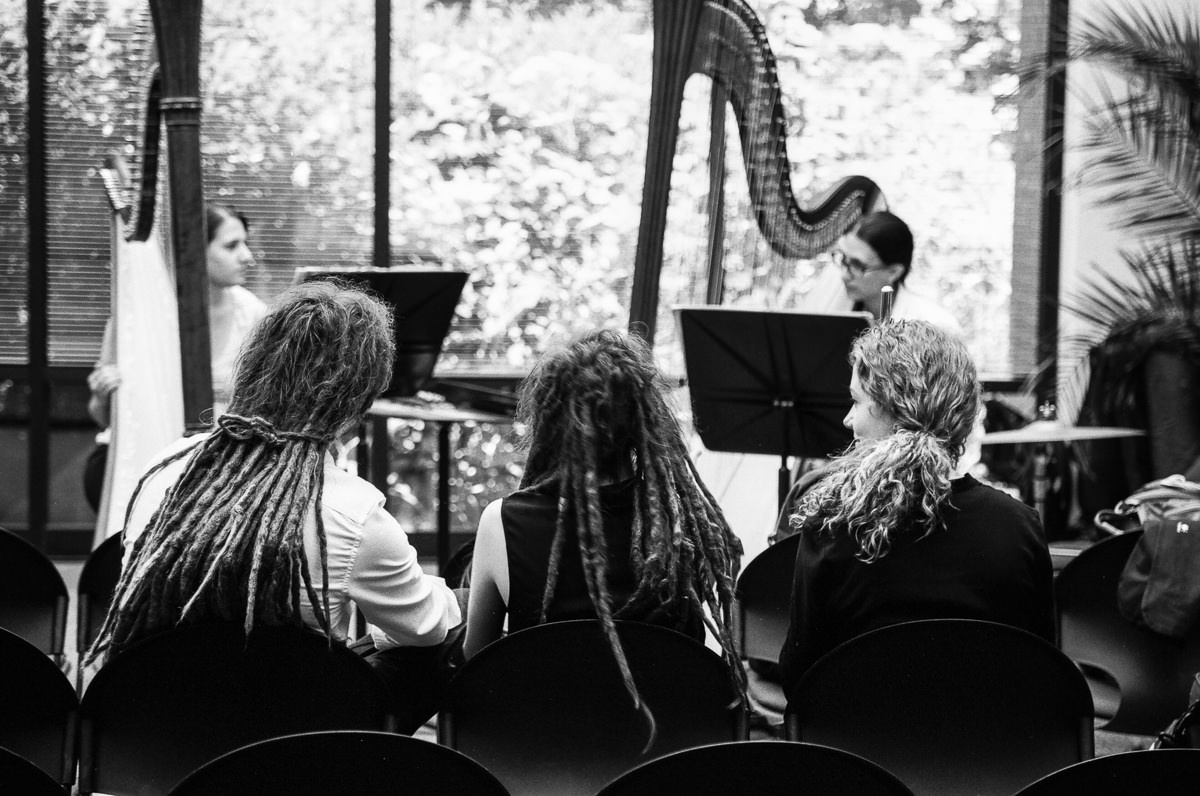 Enter the Canon EOS 100, a film SLR from 1991. The EOS 100 was known for being remarkably quiet, far quieter than any other mechanical shutter I’ve ever used, even on a mirrorless camera. What’s even more impressive is that it also had to advance the film, and it did this just as quietly as actuating the shutter. How quiet was it? I took the shot above in a library with just two harps playing from only 20 feet away, something I wouldn’t dream of doing with a modern digital camera. I don’t know what magic put in the EOS 100’s mechanical shutter, but bring it back, please.

This was another Canon feature. Eye-controlled autofocus was exactly what it sounded like: the ability to choose your autofocus point simply by looking at it. It first debuted on the EOS A2E in 1992 and appeared in several models until 2004, with perhaps its most impressive iteration being in the EOS 3, where one could control 45 autofocus points by eye and even store three separate custom eye calibrations for working with glasses or multiple photographers. Why was it so awesome? Well, much like my fondness for push-pull zooms, it allowed you to control a camera function in the most natural and intuitive way possible. Furthermore, I have never been particularly fast or accurate with AF joysticks. Touchscreen drag to focus has been a nice boon, though my nose occasionally messes it up. There has just not been anything as intuitive or easy as eye-controlled autofocus, at least in my opinion.

This feature is actually coming back in the upcoming EOS R3, and I am super excited to see what a modern iteration of it can do, and if it is successful, I would love to see it become a more common feature. Whereas the original iterations were a bit polarizing, with some photographers loving them and some seeing it as no more than an unreliable gimmick, I imagine a few decades of technological advancement will help it win over a few more users this time around. Given how relatively conservative Canon normally is with features, I imagine they wouldn’t put eye-controlled autofocus in cameras again unless the system was working well. In particular, in an action camera such as the EOS R3, which will be mostly used by sports and wildlife photographers, anything that can give even a slight advantage in speed will be welcomed with open arms.

What Do You Miss?

What features of yesteryear would you like to see in modern cameras? Let me know in the comments.