As landscape photographers, we are used to leaving our warm bed in the early morning, being on location, and also having a composition before the sun starts to rise. But what if we arrive after the sun has come up? Is there still a way to go home with strong photographs?

In my latest landscape photography vlog on YouTube, I wanted to photograph enchanting scenes with hoarfrost-covered trees. There was a clear sky predicted, though, but the hour before sunrise and sunrise itself usually offer us fantastic opportunities. We just have to be sure to be finished with our last composition before the sun has risen because there is no chance to get strong photographs with harsh light then. Or are there possibilities?

When the weather conditions turn to something that has nothing to do anymore with what you have originally planned, it is time to forget your plans. It does not make sense trying to photograph trees with hoarfrost when the sun is already melting the frost away and when the light is already too harsh for interactions between sparkling frost and shadows.

There are a lot of different motivations why people go out for landscape photography. Whatever your favorite reasons might be, I guess enjoying nature and improving your photography could be quite high on your list. What about doing exactly that? Forget about the outstanding conditions you hoped for. They are gone and will not come back. Focus on that what is there instead, come over that red line that keeps you back as a photographer, and improve your photography by trying something different. 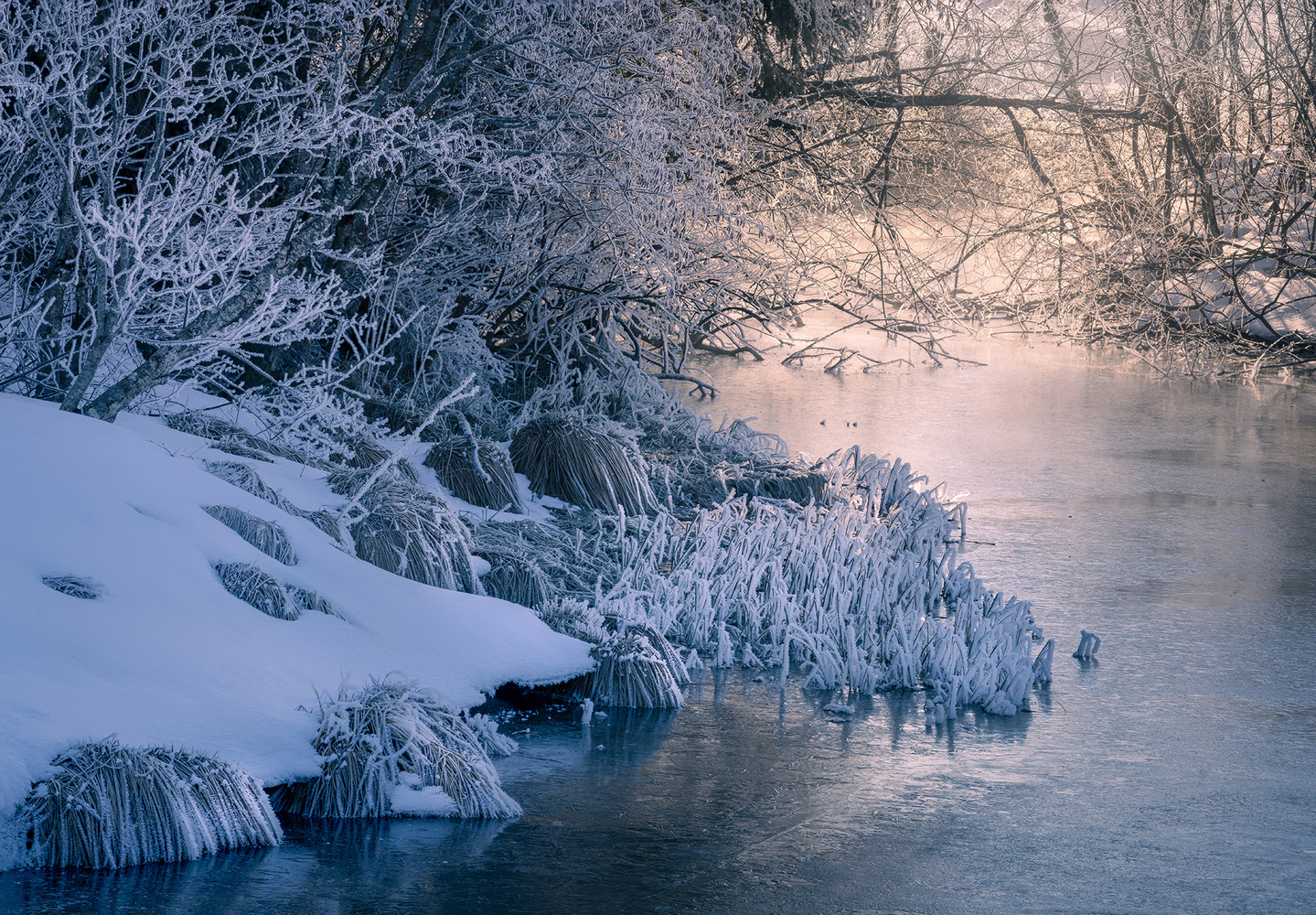 Find What to Focus On

In the above-mentioned video, you can see that I got extremely harsh light on a winter day in the Alps. Due to the reflecting snow, I found it quite hard to see anything on the display of my camera. and that made it impossible for me to use autofocus. But I ignored all the obstacles and focused on the possible things instead. And the longer I engaged with them, the more possibilities I saw.

I focused on contrasts, textures, forms, and shapes. Those who have already tried to photograph in harsh light in a snow-covered landscape know that the difference between bright and dark areas is not the only problem. The thing that is missing is that enchanting mood, given by soft light.

After a quick warm-up shot, I found a little stream, surrounded by trees, that offered some shadow areas. It was frozen, which painted subtle patterns on its surface. There was still hoarfrost in the shadows, which offered me fantastic opportunities for getting textures into my composition, and the backlight, shining through the trees in the distance, built amazing contrasts and brought energy into the image. I decided on a camera position behind a little hill to get control over the amount of light coming into my frame. Ultimately, that camera position in the shadow helped me to transform harsh light to soft light that was shining in an enchanting way over my composition. It is comparable with having harsh light outdoors and photographing indoors while having the door open. 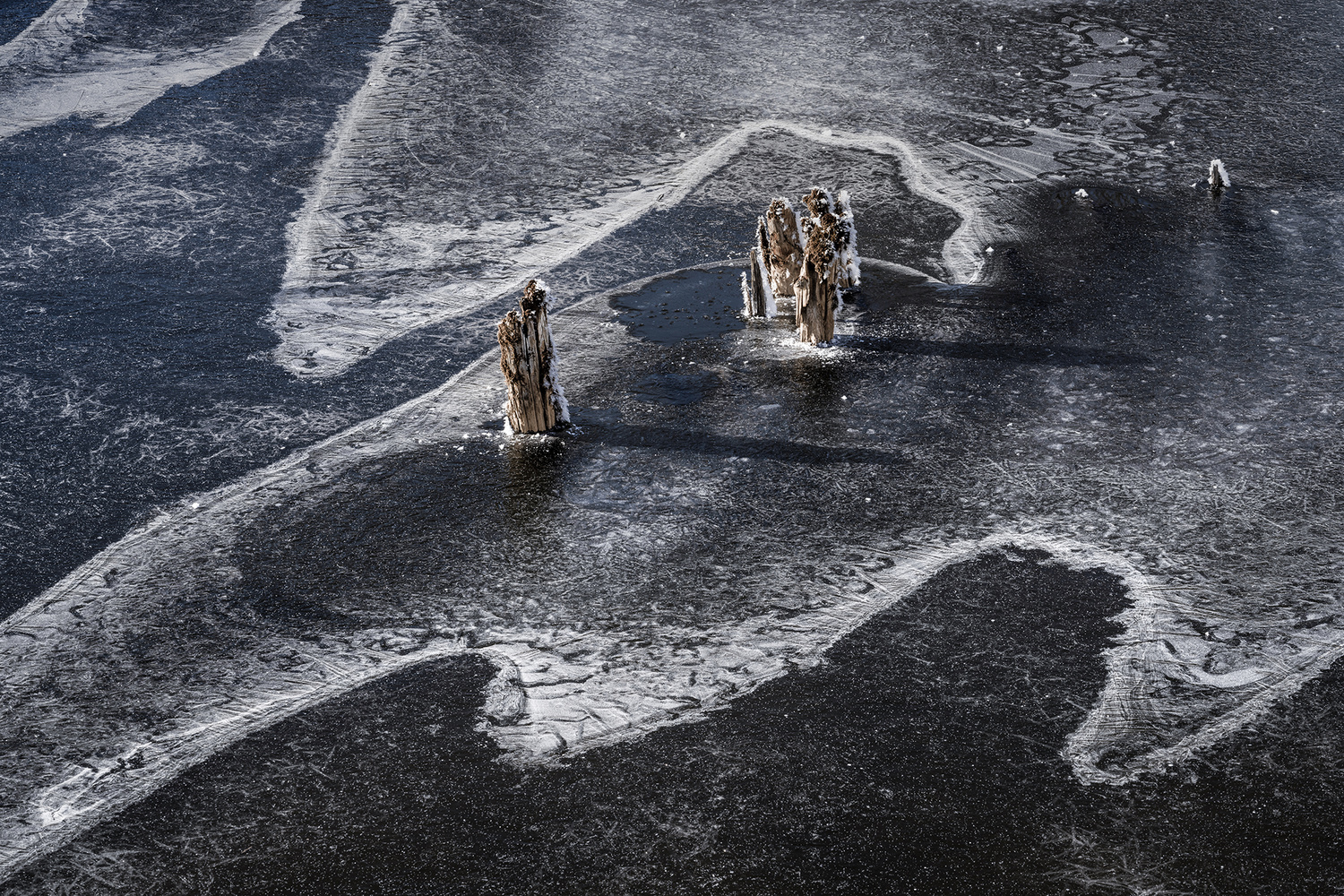 Patterns Are Your Friend

As it was quite cold on that day and also the night before, everything was frozen, which led to breathtaking patterns on the surface of the water. My first attempt was to find some awesome patterns in the shadow, for photographing more abstract and intimate landscape scenes, but the sun was already too high and the number of shadow areas was decreasing with each minute.

Shadows are always a great opportunity in harsh light situations, but we don’t need to photograph just in shadows. Ultimately, I decided to work on an intimate landscape composition in harsh light. There were wooden poles from an old fence that worked well. They added nice diagonals to the composition.

I was around an hour too late that morning, but I have to say, I had a lot of fun out there, and I got some photographs I am quite happy about. The whole adventure with many more photos and a lot of tips about landscape photography are revealed in the above-linked video.