There are plenty of articles to give you the basics on how to shoot soccer or baseball, but what about sporting events that are a little more unusual, such as parkour or rock climbing? Here are a number of tips that might well carry over to lots of other different shooting scenarios.

Different sports tend to have their own photographic requirements in terms of gear, technique, and approach, and what follows is a guide to documenting events for lifestyle sports, where instead of sitting in the stands or in a pit alongside other photographers, you’re among the action and responding to seemingly random bursts that are happening around you.

Setting Up Your Camera

My approach tends to fall into one of two modes: capturing fast-moving action with a wide angle lens or getting in tight with a longer lens to grab moments of focus. With this in mind, I take advantage of the two memory recall positions on my control dial and spend most of my time switching between the two.

For a long time, I shot entirely in manual mode, unaware that two simple features would make my work quicker, more efficient, and with more keepers.

The first of these game-changers is auto ISO, which means that in manual mode, I have control over my shutter speed and aperture via my finger and thumb, but the camera is still determining the exposure by automatically changing the ISO. If I’m losing detail in the shadows, I can make a quick adjustment by increasing my exposure compensation dial. I’ve always got my histogram on the screen to ensure that my EVF isn’t misleading me, and this is also useful for reminding me to return my EC dial to 0. 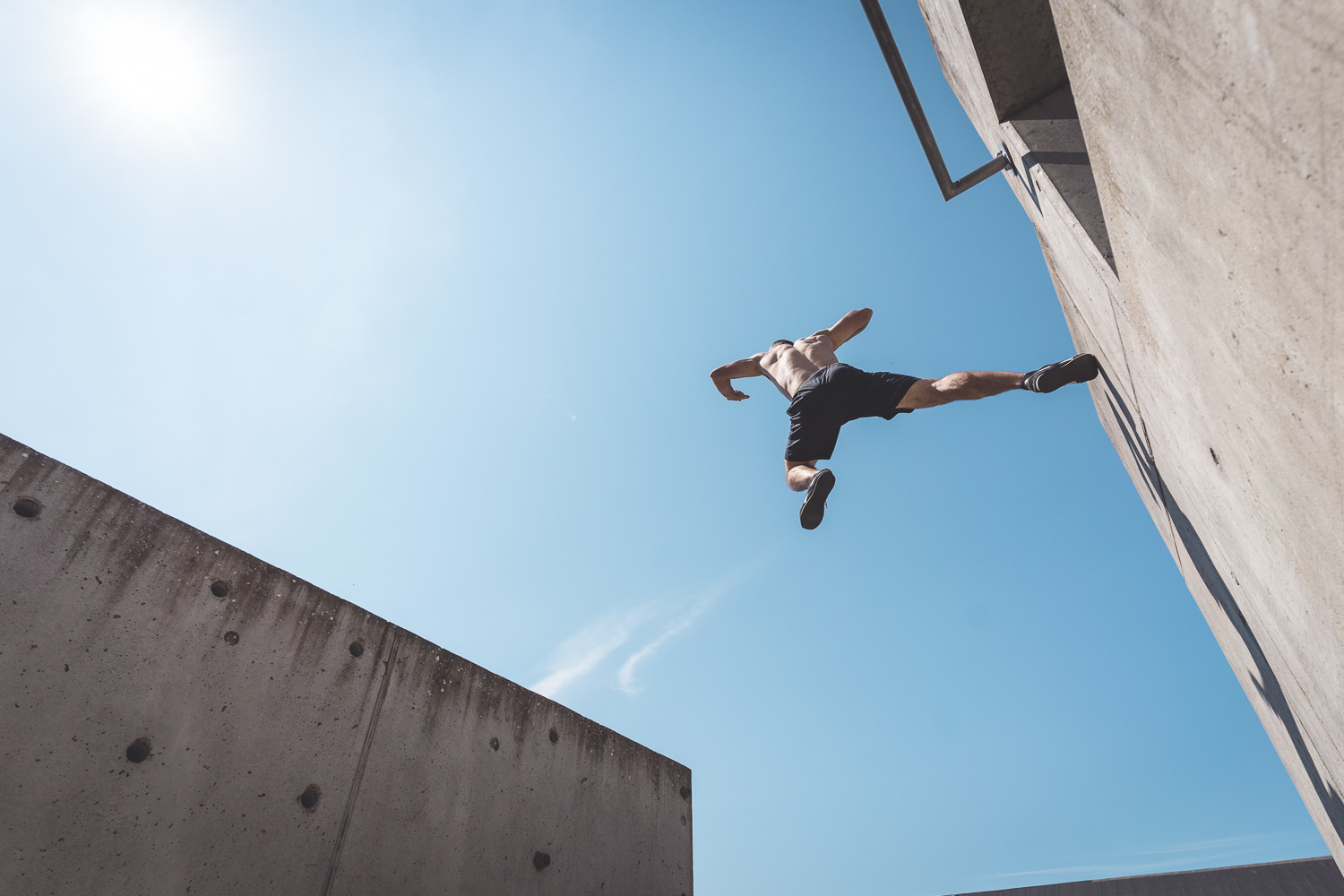 For dynamic action with my wide angle lens, I have my camera in mManual mode with the shutter speed set to 1/1,000th of a second. The aperture is set to f/5 and the camera’s burst speed is cracked up to its maximum of 10 frames per second. 1/1.000th of a second is typically more than adequate for someone running or jumping and is enough to freeze action. If I’m not sure, I’ll bump it up slightly. Often, my photos have an architectural feel to them, so having lots of depth of field is a feature. If I want to soften the background slightly, I’ll select a larger aperture, typically switching to shooting wide open.

Because athletes are often deeply focused on a movement that might be dangerous, I tend to shoot with a silent shutter. This runs the risk of introducing some rolling shutter by stretching out certain movements, though it’s rarely an issue. In addition, I rarely pan my camera, so I’m not adding movement to the background of my shots. I have a shortcut saved so that I can quickly switch back to a mechanical shutter should I need it.

All of this — shutter speed, aperture, auto ISO, burst rate, silent mode — is saved to my first memory recall slot.

The second game-changer is aperture priority mode, again paired with auto ISO, though this time with a minimum shutter speed set to 1/250th of a second and the aperture wide open. This is saved to my second memory recall slot. Intended for use with a longer lens, this is set up for me to grab moments of focus and occasional portraits. This is what I also tend to use most when photographing climbing.

For fast-moving action, I’ll switch back to my other memory recall slot — manual mode, auto ISO, and shutter speed at 1/1,000th — and dial the aperture from f/5 down to f/1.8. By default, I’m farther away, so the sound of my shutter is unlikely to be a distraction, and as shooting with the mechanical shutter tends to give very slightly better background separation, I don’t shoot silently.

Focusing When Shooting With the Wide Angle Lens

I spent many years shooting on a Canon 6D (classic) and became very accustomed to having only one decent focusing point in the center of the frame. As a result, trying to move away from my habit of focusing and reframing is taking a while, and for events, I stick with what works: I use the smallest available focusing point, and while I’ll happily move it around, it spends a lot of time in the center. 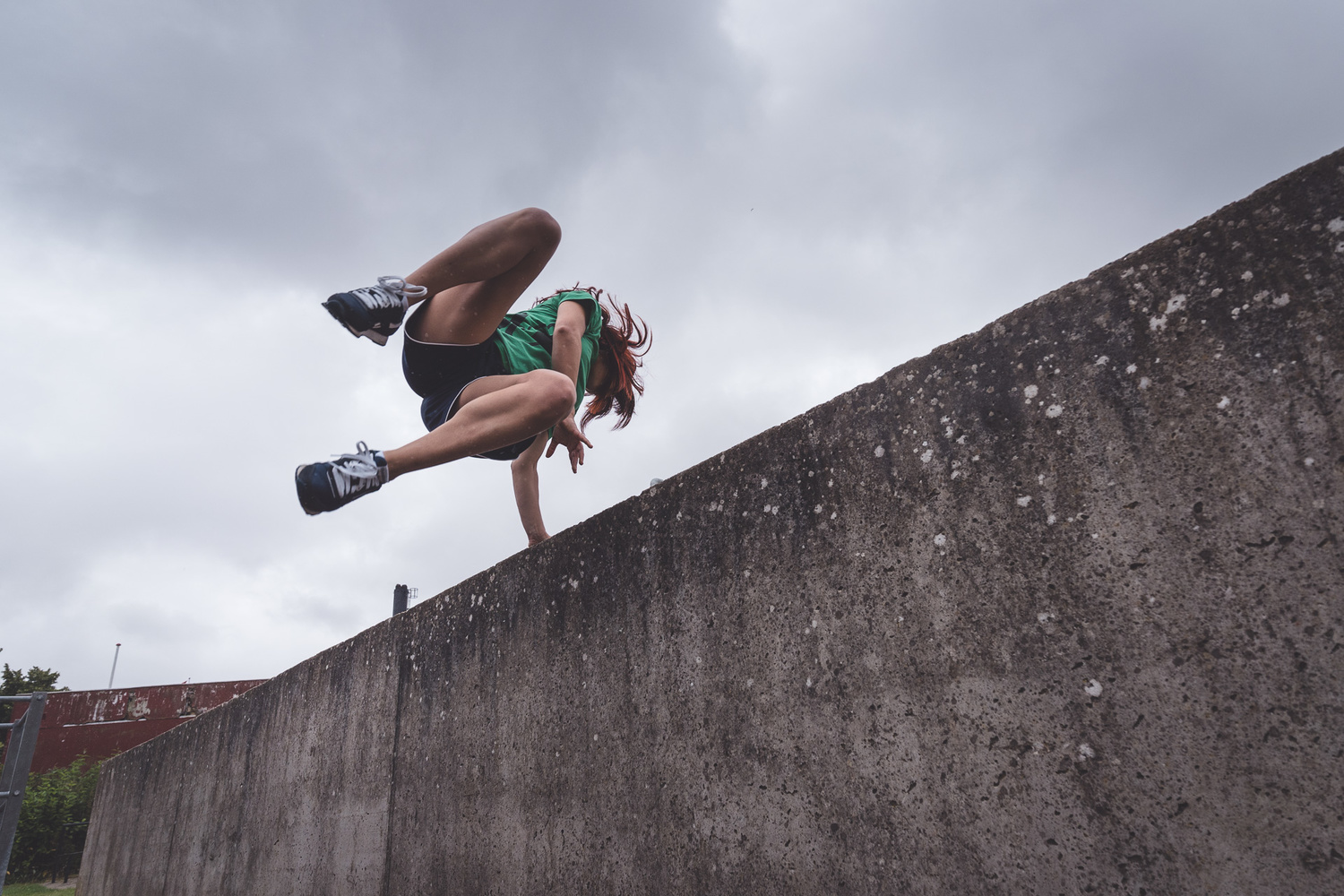 If that sounds like a bizarre method for shooting action, let me explain: most of the time, I frame my shot in advance and know exactly where the athlete will be when I press the shutter button. In addition, shooting on a wide angle lens at f/5 means that I have a huge depth of field, so focusing on something in the scene that is the same distance from me as the athlete is going to mean that I rarely have a shot that isn’t sharp. 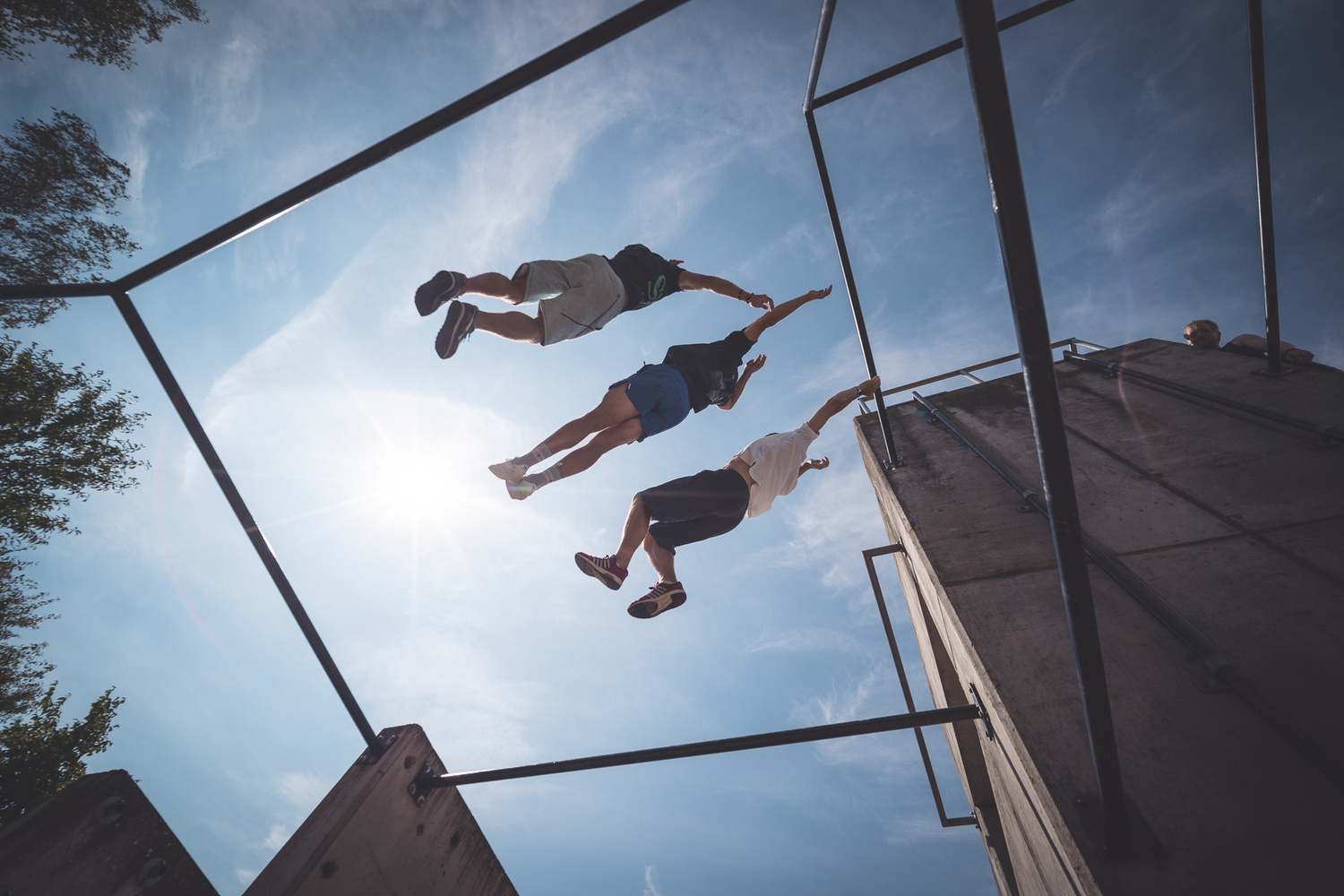 Framing athletes effectively depends on choosing the composition in advance, and knowing to a degree what an athlete is going to do makes this possible, especially as tracking an athlete is often impossible, as I’ll position myself quite low below a jump or a wall. Because of this, they can appear very suddenly in the frame, so quickly that I don’t trust the autofocus to grab them consistently.

Focusing With the Telephoto Lens

Just like many photographers, eye autofocus has been a third game-changer. Portraits at shallow depths of field are now far easier and quicker, and candid shots are far more consistent. In addition to having eye autofocus mapped to a custom button, I have a second button that triggers the “wide” autofocus area, prompting the camera to make its best decision. The keeper rate isn’t as high, but this is useful for unpredictable, fast-moving subjects when the eye isn’t consistently visible.

For predictable movement, I might still pre-focus on something, such as the corner of the black rail in the example below. It’s far from a perfect system, but it can be your best bet when shooting through a crowd of elements that are all competing for the autofocus’ attention. Otherwise, it only takes a person to step in and out of your shot just before the action happens and your autofocus has wandered off elsewhere.

I’ll follow up with a second article on the gear that I use, how I adapt according to what athletes are up to and how I then deliver images to participants.

For anyone interested, I’ll be live on Zoom interviewing internationally renowned climbing photographer Lena Drapella (Instagram here) on September 13 as part of the online program for this year’s Women’s Bouldering Festival. You can buy a ticket for around $14, which gets you access to all 12 of this year’s talks and presentations.

Any questions or suggestions, be sure to get in touch via the comments below.